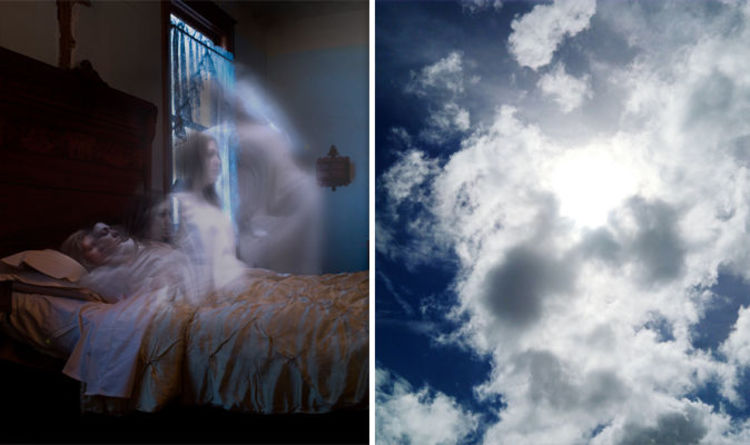 
The man, who only gives his name as Charlie, says that he suffered a “major life-threatening” heart attack.

Once Charlie arrived at hospital, his heart gave out and this is where he temporarily die.

However, he is still unsure to this day as to how long he was clinically dead for two seconds or two hours.

When Charlie reached the afterlife, he claimed to be in an all-white room where all the furniture was white, with two other men in there.

Charlie says he was sat down in an old, white wooden chair opposite the two men who were behind a desk.

Charlie writes on the website NDERF, which collects people’s experiences of the afterlife: “Behind this large desk was a man who was intimidating and very powerful.

“On his right had was very large ring. The ring had inscriptions which I do not remember, but for some reason the ring stood out as something very important.

“This man and the desk were in the centre of the room. I do not recall anything on the desk.

“The third individual was seated in a chair on the right side of the room. This person looked similar to my father.

“When he spoke, it sounded like my father’s voice. I do not recall what he said, but I do know that he and the man behind the desk were conversing.

“I never spoke. I recall looking back and forth at both of them. Once they completed their discussion, the man behind the desk looked at me and said, ‘You will be ok’.”

At this point, Charlie was thrust back into the hospital room where he gained consciousness.

After spending years analysing the ring on the man’s finger, Charlie believes that it could relate to the Old Testament.

In the Book of Esther, King Xeres was known to use his large signet ring to seal decrees.

According to the fable, King Xeres was sent by a God to rule over the nations, and he later went on to build the Gate of All Nations in what was Persia – a place where all visitors must pass on their way to “pay homage to the King”.

Charlie speculates that he may have had to pass King Xeres on the way to God.

Mummies With Golden Tongues Discovered in Ancient Egyptian Necropolis : ScienceAlert
People in Portland Planted Trees. Decades Later, a Stunning Pattern Emerged : ScienceAlert
10 Days After Its Launch, Orion Has Successfully Entered Lunar Orbit : ScienceAlert
Mysterious Changes Identified in The Brains of People Who Get Migraines : ScienceAlert
These Mysterious Fungi Belong to an Entirely New Branch on The Tree of Life : ScienceAlert