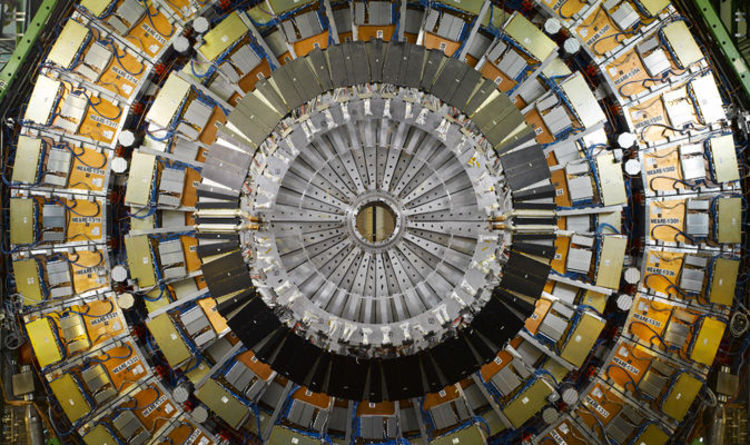 
The suspected ‘ghost particle’ was discovered by the LHC’s multipurpose Compact Muon Solenoid (CMS) which showed bumps in the data that indicate an unknown particle with more than twice the mass of a carbon atom.

While researchers are understandably excited about the potential discovery, they are are also baffled.

This is because the particle would not fit into any of the standard models of physics, meaning the laws may have to be rewritten.

The data indicated that the new particle had a mass of 28GeV or one billion electron volts, slightly less than a quarter of the mass of a Higgs Boson.

When the Higgs Boson was discovered at the Large Hadron Collider, scientists said that it completed the Standard Model.

The Standard Model is a theory in particle physics that dictates how all of the particles in the universe interact, and the Higgs Boson, also known as the God Particle, was deemed necessary to give mass to other particles.

The discovery of the Higgs Boson in 2012 validated generations’ worth of physicists theoretical work.

Without Higgs Boson, scientists claim, mass would fundamentally not exist.

The new particle could force physicists to reanalyse the Standard Model, and the data has been passed on to Atlas, another particle detector at LHC, to double, triple and quadruple check their findings to ensure it is not a misreading of the detectors.

Alexandre Nikitenko, a theorist on the CMS team who worked on the data, said: “I’d say theorists are excited and experimentalists are very sceptical.

“As a physicist I must be very critical, but as the author of this analysis I must have some optimism too.”

CERN, the organisation which runs LHC, researcher Michelangelo Mangano cautioned: “Of course theorists are always happy when some anomaly shows up in the data. And I am confident many colleagues have started looking into this.

“However it is a bit early to get excited.

”Given that Atlas has yet to release their analysis, and given that much more data is on tape even for CMS, it is clear that the effect will soon be confirmed or diluted away.”

The research could now take up to a year to conclude.

This May Be The Oldest Fragment of Modern Humans in Europe, Or Something Even Rarer : ScienceAlert
Massive Global Study Shows Belief in Witchcraft Is More Abundant Than You Might Think : ScienceAlert
Humans Keep Growing an Extra Artery in Their Arms, And This Is Why : ScienceAlert
Mysterious Tendrils Inside The Brain May Control Our Perception of Time : ScienceAlert
Earth’s Oxygen Came From an Unexpectedly Deep And Hot Source, Study Suggests : ScienceAlert