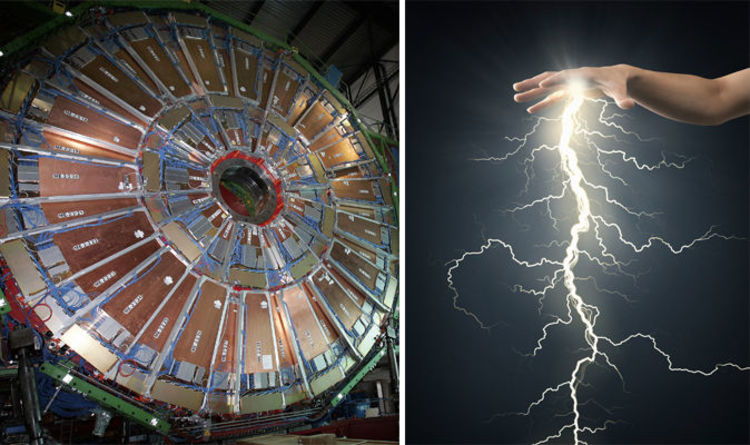 
Researchers use the LHC to smash particles into each other in a bid to discover new particles – such as the Higgs Boson, or God particle, which was found in 2012 at LHC.

However, the consequences could be far more severe and potentially summon a God or evil presence, according to conspiracy theorists.

Professor Irina Aref’eva and Doctor Igor Volovich from the Steklov Mathematical Institute in Moscow stated that when two particles collide in LHC, they could tear a hole in the fabric of spacetime.

This caught the interest of conspiracy theorists who believed that this tear could be a wormhole to another universe.

Website All Time Conspiracies said: “CERN’s claim it was looking for the God Particle was a blind, to deflect attention away from its true purpose: to create a wormhole underground, and open a gateway through which God could arrive on Earth.

“However, it is not the Abrahamic God most of us are familiar with.

“The scientists at CERN plan to summon Shiva, the source of all evil In Hinduism, Shiva is the great destroyer

“His role is to bring the universe to an end, to obliterate all existence and then give birth to it anew

“His consort is Parvati, whose forms include Kali, the goddess of death Curiously, outside the headquarters of CERN, is a statue of Shiva in one of his forms.”

Quite why CERN, the organisation which runs the LHC, wants to destroy the very universe it resides in remains unclear, but it is not the first bizarre theory to questions CERN’s intentions.

When particles collide at almost light speed, their gravitational pull is trapped, which theoretically could make a black hole.

In his new book, On The Future: Prospects for Humanity, Lord Rees outlines how the experiments could go wrong.

He said: “Maybe a black hole could form, and then suck in everything around it.

“The second scary possibility is that the quarks would reassemble themselves into compressed objects called strangelets.”

“That in itself would be harmless. However under some hypotheses a strangelet could, by contagion, convert anything else it encounters into a new form of matter, transforming the entire Earth in a hyperdense sphere about one hundred metres across.”

Lord Rees added the third way particle accelerators could obliterate Earth is by creating a “catastrophe that engulfs space itself”.

Clinical Trial Restored Sight to 20 People With Corneas Made From An Unlikely Source : ScienceAlert
An Experimental Surgical Robot Is Headed to The International Space Station
Robot Shows It’s Possible to Swim Through The Emptiness of a Curved Universe : ScienceAlert
Extreme Drought in Italy Reveals Hidden Bomb Submerged in River Since WWII
This Artificial Synapse Can Run a Million Times Faster Than Ones in The Human Brain : ScienceAlert