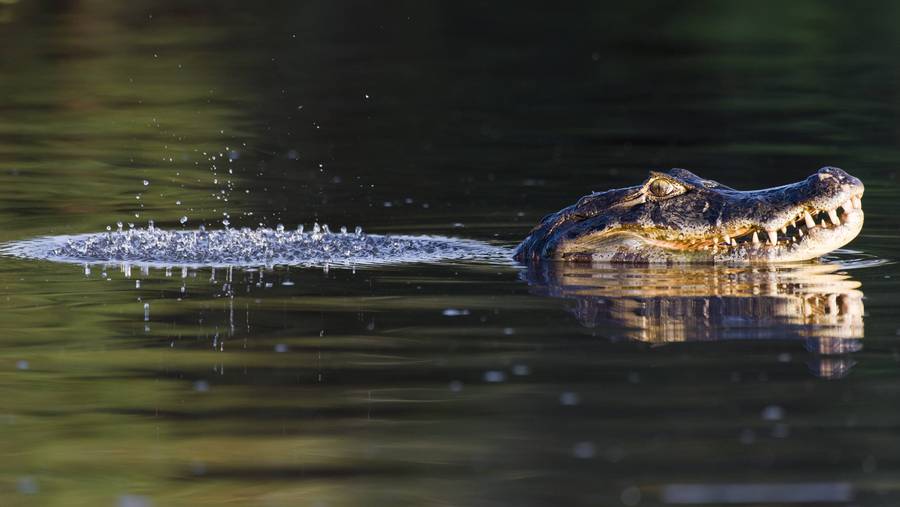 
A caiman was spotted attacking a swimming duck in Lake Hallwil, Switzerland.

Meanwhile, the 1,5 meter (almost 5 feet) long creature has been dubbed the ‘Hallwilersee Monster.’

The strange sighting of the hunting caiman was made by a fisherman on Sunday evening on the Hallwilersee between Mosen and Beinwil am See: ‘A larger animal appeared, caught the duck and pulled it into the abyss.

The police spokeman clarified that according to zoologists, the predator was a 1.5 meter long caiman.

The reptile, which belongs to the alligator family, was a danger to small animals such as ducks, cats and small dogs, but there is no threat for humans. Caimans, which usually eat fish and algae are generally shy and only react aggressively when they feel threatened.

Still knowing that this beast is freely living in the lake I do not want to swim there anymore.

Caimans are protected in Switzerland and require a permit to hold. The police supposes this caiman was illegaly hold and then released into the wild when it became too big to hide or to feed.

Almost three years ago, a baby caiman made the headlines when a young cyclist had to stop in front of him on a street after escaping from its owner in Rümlang.

Study of 500,000 Medical Records Links Viruses to Alzheimer’s Again And Again : ScienceAlert
Physicists Break Record Firing a Laser Down Their University Corridor : ScienceAlert
This Physicist Says Electrons Spin in Quantum Physics After All. Here’s Why : ScienceAlert
JWST Has Found Life’s Elemental Building Blocks in The Depths of Darkest Space : ScienceAlert
One Simple Idea Makes It Much Easier to Manage Your Weight Over Time : ScienceAlert