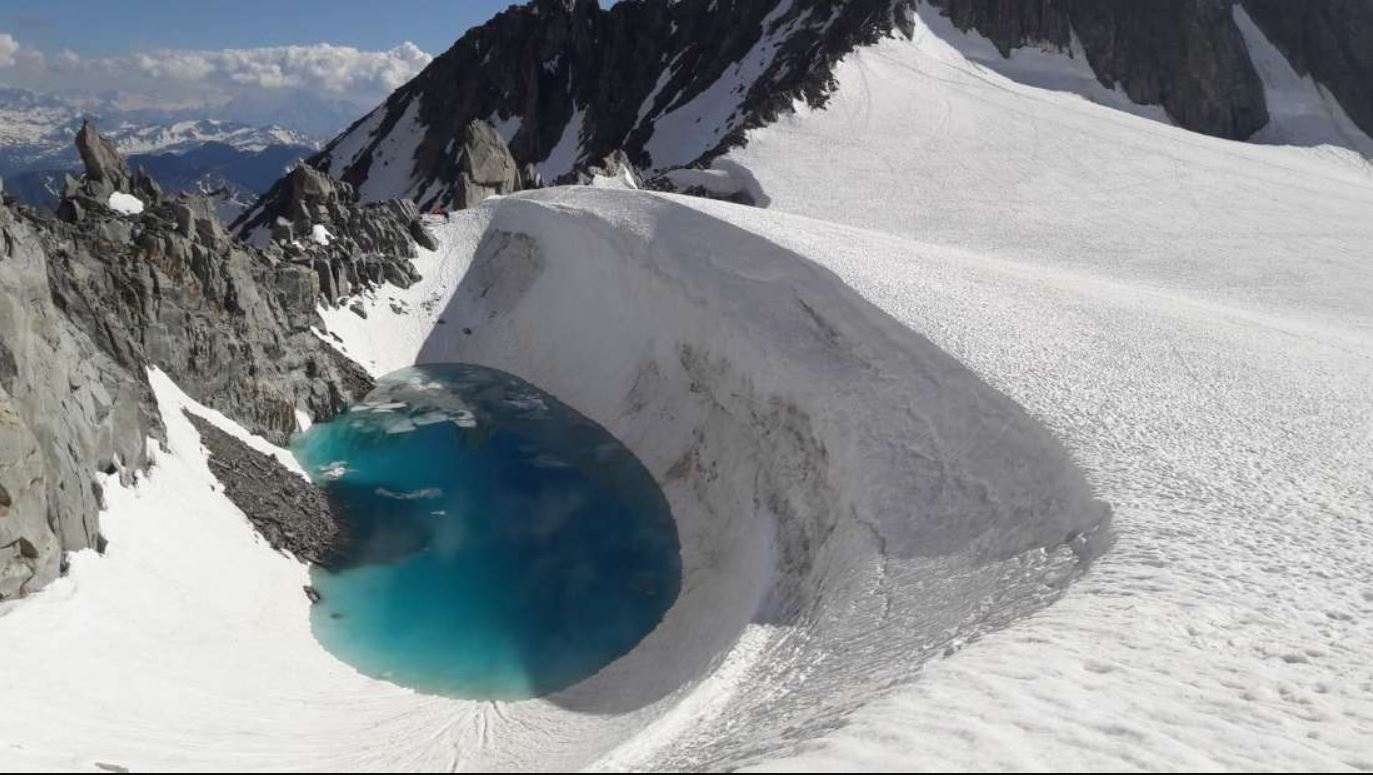 
Mont Blanc in France is the highest mountain in the Alps and the highest in Western Europe. A perfect location for a hike during a heatwave.

If you were around at the end of June, you could have even taken a nice swim in a beautiful lake that popped up out-of nowhere at over 3,000 meters (9,800 feet) altitude – one that admittedly is not usually there.

Spotted and photographed by mountaineer Bryan Mestre on June 28, the lake formed at the base of the Dent du Géant mountain in the Mont Blanc massif and the Aiguilles Marbrées peak at around 3,400 meters (11,100 feet) altitude, and it caught him completely off guard.

He explains: “Time to sound the alarm… The problem here? These two pictures were taken only 10 days apart… It was taken earlier on June 28th, the second one was shared by Paul Todhunter. Only 10 days of extreme heat were enough to collapse, melt and form a lake at the base of the Dent du Géant and the Aiguilles Marbrées. That I know, this is the first time anything like that as ever happened.

Southern Europe and the Alps have been struck by a massive heatwave with temperature ranging from 40 to 50 degrees, the below 0 freezing altitude was as high as 4,700m (15,400ft) and during the day temperatures as high as 10 degrees Celsius (50 F) were felt on top of Mont Blanc 4,810m (15,780ft)… This is truly alarming glaciers all over the world are melting at an exponential speed...”

“Needless to say, the lake was a real surprise. It’s located in the 3,400 to 3,500-meter area. You’re supposed to find ice and snow at this altitude, not liquid water. Most of the time when we stay for a day at this altitude, the water in our water bottles starts freezing.”

The lake was around 10 meters by 30 meters (33 feet by 98 feet), holding around a few thousand cubic meters of clear meltwater. Although many snowy mountainsides host lakes, it’s unusual at such an altitude above sea level. Mestre said he and the mountain guide with him that day had never seen this before.

“I have been up there a fair amount of times, in June, July and even August, and I have never seen liquid water up there, and I’m not only talking about Mt Blanc massif,” Mestre said.

“I have been up dozens of [mountains] around the Alps. During the hottest days, you may find snow melting, but that’s it.“

A lake has appeared here before during a previous heatwave in 2015, observed by glaciologist Ludovic Ravanel, though it was not as big.

Mestre described what he thought had happened as similar to a solar oven: the high temperatures allowing some of the glacier to melt, which revealed more of the rock. The dark rock then absorbs more heat, melting snow until the lake formed. Because the mountain’s isotherm was so high up in June, the lake didn’t freeze and disappear overnight.

Though beautiful to look at, it’s not a good sign of things to come. Well, this lake will probably also rapidly disappear in a giant Mont-Blanc crack.