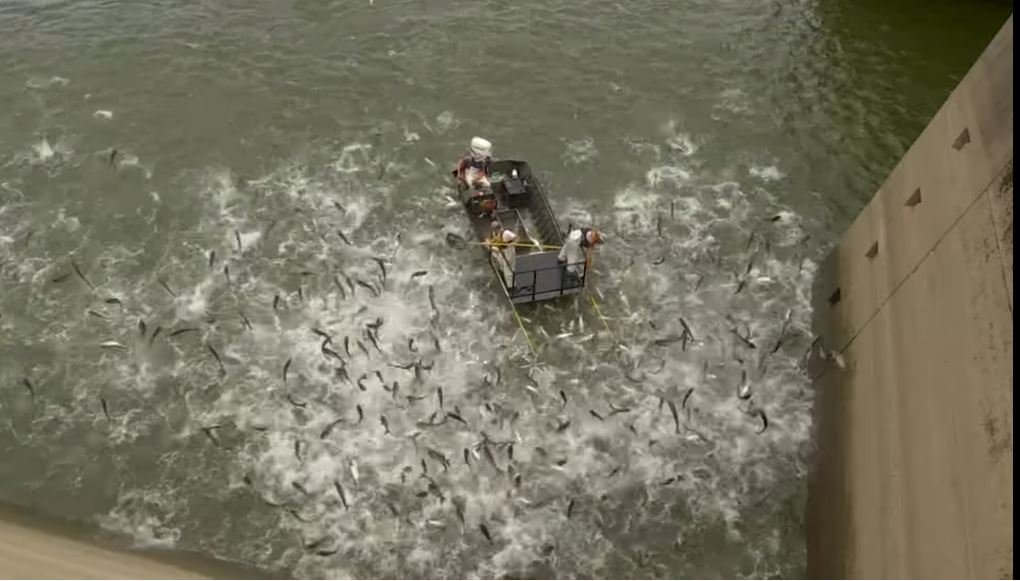 
The Asian carp problem is very bad across Kentucky.

To show the dramatic problem, the Kentucky Department of Fish and Wildlife, deployed a “shocking” boat in Lake Barkley, electrified the water, causing thousands of Asian carp to jump out of the water at the same time. Watch the shocking video below:

The demonstration was meant to show how many Asian carp are in the water and as an example of how the experiment will work. The carp was then collected — alive — for study.

Why am I still using lures? These guys caught more in 3 minutes than I have in my entire life!

What are Asian carp?

Asian carp are an invasive fish that were introduced to the United States by catfish farmers in the ’70s.

Now, they’ve inundated waterways along the Mississippi watershed and the Illinois and Missouri rivers.

Carp populations grow at a rapid rate, and all their eating reduces the amount of food for other fish in the ecosystem.

They were allowed to bring Asian and silver carp in to take care of algal blooms, and they used the fish and sold them to the ethnic markets, like Chinese markets. What they didn’t realize is that these things would escape the ponds and get into the river system quickly. It took 30 years for them to get there.

Those Asian carp were brought here for a good reason, but the folks who brought them had no idea that it would cause such a terrible problem. That’s what’s life and actions are… You think you make something good… It’s just years later that problems start emerging!

Incredible Footage Shows Planets Circling a Star Light-Years Away : ScienceAlert
Incredible ‘Fairy’ Robot Sails on The Breeze Like a Floating Dandelion : ScienceAlert
Wildfire Destruction in The Western US Has Doubled in Just 10 Years : ScienceAlert
A Splash of Milk in Coffee May Have Health Benefits We Didn’t Know About : ScienceAlert
Bar Graphs Induce a Hidden Bias in Interpretation, Experiment Shows : ScienceAlert