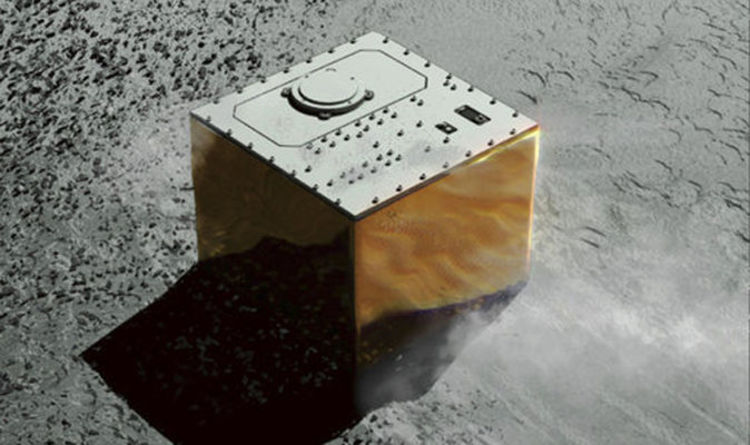 
The Japanese space agency, JAXA, made history on September 21 by landing two rovers on a 1km asteroid.

The asteroid, called Ryugu, is home to two rovers creatively named Rover 1A and Rover 1B where they will remain for the foreseeable in a mission that will see the bots capture images of the giant rock’s surface and temperature.

Now however, they have been joined on the asteroid, which is a 170 million miles (280 million km) away, by another component from the space agency.

A shoebox-sized lander called the Mobile Asteroid Surface Scout (MASCOT) was deployed from Japan’s Hayabusa-2 spacecraft, which has been in orbit of the asteroid, and experts say it was an entirely smooth manoeuvre.

MASCOT project manager Tra-Mi Ho, from the DLR Institute of Space Systems in Bremen, Germany, said: “It could not have gone better.

“From the lander’s telemetry, we were able to see that it separated from the mothercraft and made contact with the asteroid surface approximately 20 minutes later.”

The machine, which was a German and French collaboration, is already fulfilling its purpose on Ryugu by gathering data with its four on-board instruments – a camera, a radiometer, a spectrometer and a magnetometer.

MASCOT has already captured 20 images, most of which are from its descent to the asteroid, and some of the data has already been relayed back to Earth.

MASCOT team member Karl-Heinz Glaßmeier, from the Technical University of Braunschweig in Germany, said: “The measurements show the relatively weak field of the solar wind and the very strong magnetic disturbances caused by the spacecraft.

“At the moment of the separation, we expected a clear decrease of the interference field — and we were able to recognise this clearly.”

The mission marks the first time that a rover has ever landed on an asteroid.

It differs from the European Space Agency’s Rosetta mission which landed on a comet in 2016, as that probe was only online briefly and remained stationary on the surface.

Hayabusa-2 reached the asteroid, which was left over from the early days of our Solar System, but the rovers have only just been deployed.

The rock is known as a relic and belongs to a primitive type of asteroid formerly known as 162173 Ryugu.

Should the Japanese mission go according to plan, studies of the rock could pave the way for greater knowledge of the evolution of space and Earth.