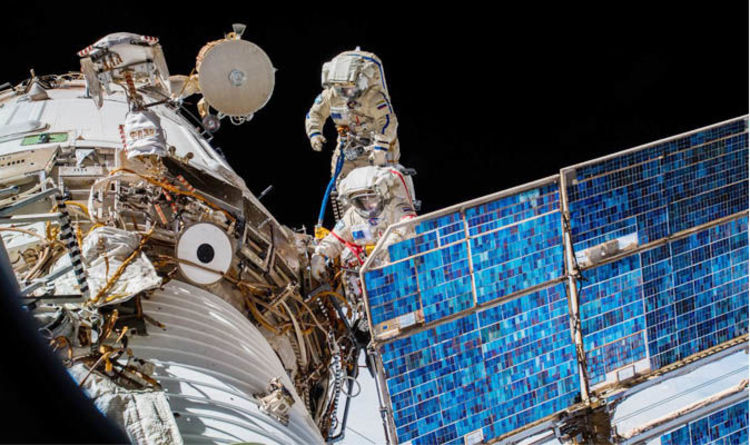 The two Russian astronauts were tasked with installing new antennas, cables and instruments outside the space lab.

The German geophysicist, known for his frequent snapshots of life onboard the ISS, documented his colleagues’ work outside the station.

Sharing his spacewalk photos on Twitter today, the astronaut said: “The ultimate work place. My crew mates @OlegMKS and Sergey successfully installed the Icarus experiment antenna on the outside hull of the ISS.”

The Russian astronauts spent seven hours and 46 minutes outside the ISS.

During the spacewalk, the space engineers were tasked with launching four small satellites into orbit and installed an experiment dubbed Icarus on the Russian portion of the lab.

Icarus is an environmental experiment hosted by Roscosmos and the German Aerospace Centre (DLR) to study the migration patterns of animals on the Earth below.

The intricate instrument is fitted with an antenna and GPS tools designed to pick up signals from animals tagged with small GPS receivers.

The two space agencies hope to learn more about the migratory patterns of animals moving from one location to another as well as how diseases spread between animal groups and how population density changes with time.

Yesterday’s mission marked the 112th journey outside of the space station as part of the ISS’ assembly, maintenance and upgrade efforts.

The space walk was the very first undertaken by Mr Prokopyev and the third for Mr Artemyev.

Mr Artemyev last found himself outside the ISS on August 18, 2014, when he was the Expedition 40 Flight Engineer.

The ISS astronaut spent a total of five hours and 11 minutes in space during the space walk.

This year alone there have been seven ventures outside the ISS, the longest of which lasted eight hours and 13 minutes on February 2.

The first ever space walk took place on December 7, 1998, when astronauts Jerry Ross and James Newman worked on the ISS for a total of seven hours and 21 minutes.

Dubbed Mission STS-88, the two astronauts participated in the assembly of the ISS less than a month after its individual components were blasted off into space.

Overall it took the ISS more than 30 missions spread out over a period of 10 years to fully assemble the space station.

The first segment of the ISS, the Russian Functional Cargo Block known as Zarya, blasted off into space on November 20, 1998.

On December 4, 1998, the first US-built component of the ISS joined the Russian module.

Since November 2, 2000, the ISS has been constantly inhabited by crews of astronauts who conduct all sorts of experiments 240 miles above the surface of Earth.

These Are The Most Distant Star Clusters Ever Seen, And We Nearly Missed Them : ScienceAlert
A Rare Condition Makes Hair Truly Untamable, All Thanks to These Genes : ScienceAlert
Deep Brain Simulation Could Alleviate OCD When Other Treatments Have Failed : ScienceAlert
We Just Got Our Closest View of Europa in 20 Years, And We Can’t Stop Staring : ScienceAlert
New Discovery Means Parkinson’s Could Be Diagnosed With a Swab in Just 3 Minutes : ScienceAlert