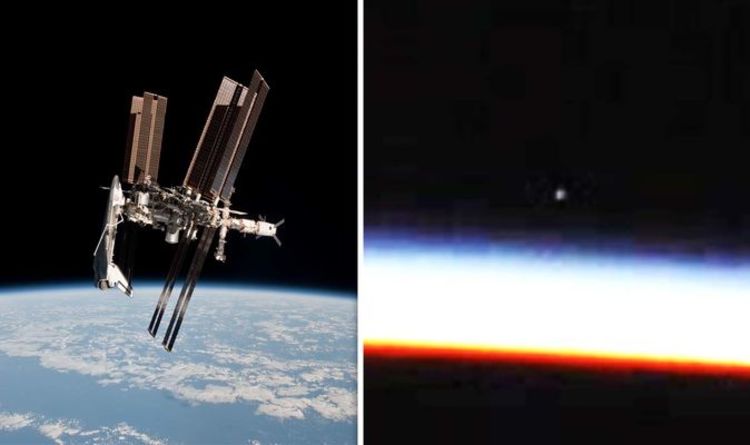 Today, Russia launched the Soyuz MH-14 into low-earth orbit, destined for the International Space Station (ISS) for 10 days time. The rocket is carrying the Skybot F-850 robot, nicknamed Fedor – short for Final Experimental Demonstration Object Research – which will spend one week on the satellite. Fedor will ”perform several tasks under the control of astronaut Alexander Skvortsov and will be able to communicate with the crew,” according to the Russian space agency Roscosmos.

Eagle-eyed viewers will be watching NASA’s ISS feed on September 1, when the rocket is due to dock with the space station.

However, they are unlikely to get a sight quite as bizarre as what happened in July 2016.

Video footage appeared to show a small white anomaly making its way through space – heading to the Blue Planet.

Then the feed cuts.

The anomaly was spotted near the ISS (Image: GETTY/YOUTUBE)

The Fedor robot will travel to the ISS (Image: GETTY)

The clip was uploaded to YouTube channel Streetcap1, where it quickly went viral, racking up four million views.

Many conspiracy theorists chipped in on the debate in the comment, claiming it could be a UFO and proof of alien life.

However, NASA put the rumours to bed, making their own admission over the video.

Spokesman Daniel Huot told CNET: “The video is from our High Definition Earth Viewing (HDEV) experiment aboard the ISS, which is mounted externally on the ISS.

“This experiment includes several commercial HD video cameras aimed at the Earth, which are enclosed in a pressurised and temperature-controlled housing.

The white anomaly was spotted by eagle-eyed viewers (Image: YOUTUBE)

The anomaly appeared to move towards Earth (Image: YOUTUBE)

“The experiment is on automatic controls to cycle through the various cameras.

“The station regularly passes out of range of the Tracking and Data Relay Satellites (TDRS) used to send and receive video, voice and telemetry from the station.

“For video, whenever we lose signal (video comes down on our higher bandwidth, called KU) the cameras will show a blue screen (indicating no signal) or a preset video slate.”

Yesterday, it was revealed how a bizarre anomaly was also spotted “floating by” the space station last year.

YouTuber Tyler Glockner uploaded the strange video to his channel, showing a white object appearing to move through space.

It’s not the first time the ISS has been at the centre of controversy (Image: GETTY)

The conspiracy theorist speculated in 2018: “Some of you may be asking ‘what is this yellow tinge?’

“Well actually, this is just black space, because as you guys saw towards the end of the video, as the camera begins to pan back, this yellow tinge begins to fade away.

“You can also see some of the arms and equipment of the ISS come into focus on the right side of the screen.

“So what you find on many of these ISS cameras is when the lenses are zoomed at a certain point due to the Sun and the low-resolution cameras, sometimes they’ll be showing total darkness and it will have this yellowish tinge.

“But whatever this object is, it has taken the form of a white square floating by, and it’s in space.”