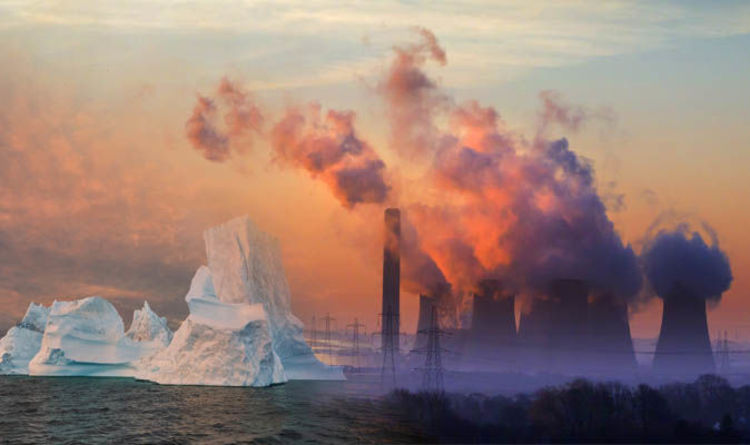 
Former Royal Society President Lord Rees made the appeal as the Intergovernmental Panel on Climate Change (IPCC) issues the most extensive-ever climate change warning over the risks of rising global temperatures.

The influential report reveals that only by keeping the temperature rise under 1.5C above pre-industrial levels will “rapid, far-reaching and unprecedented changes in all aspects of society” be prevented.

The report was published this week after it was approved by the IPCC on Saturday in Incheon, Republic of Korea.

More than 91 authors and editors from 40 countries cited 6,000 scientific references to draw the report’s conclusions.

In an exclusive interview with Express.co.uk, Cambridge University’s Professor Rees outlined what he viewed as the only viable “win-win solution” to controlling climate change.

He said: “Only by accelerating research and development will we develop better and cheaper carbon-free sources of energy.

“It’s only when clean energy gets as cheap as that from coal-fired power stations, will India, for instance – which clearly needs more power – leapfrog to clean energy.

“Otherwise India will build more coal-fired power stations – and that will hamper hitting these targets in time.”

The IPCC report states that exceeding the 1.5C rise will cause a catastrophe in as little as 12 years.

Cosmologist and astrophysicist Professor Rees agrees the only option is to take immediate action.

The climate expert said: “Although the report’s estimations are slightly fuzzy, you have to accept to actually meet the target of 1.5 Celsius is very tough and will require very rapid action.

“The world’s best hope are solar and wind, and you will additionally need batteries for storage and a smart grid to carry electricity across continents – all those things need to be developed.

“But it has not been very easy to get support for carbon taxation and things like that because it is asking people in counties like ours to pay now for the benefit of those 50 years in the future as well as other parts of the world.

“That’s a hard sell for politicians to make.

“But high-tech nations will gain by advancing technology while the other nations will also benefit by receiving clean energy quicker.”

The acclaimed scientist’s clarion call is made as his latest book “On the Future: Prospects for Humanity” is published, which details his theory on why the 21st century is unique in earth’s history.

According to Professor Rees, the future of the planet and of humanity rests in our hands.

He said: “This century is the first when one species – man – is sufficiently dominant that it can affect the future of the entire planet.

“This change can happen in two ways: in our collected effect on the climate and biodiversity, and the runaway effect of powerful new technologies, such bio, cyber and artificial intelligence.

“This is something new this century – it’s going to be a challenge to big governance and is going to determine whether governments are effective enough to give us a not too-bumpy ride for the rest of the century.

“The stakes are higher this century than they ever were before.“

‘Zombie Fires’ From Last Year’s Terrible Fire Season Are Coming Back in The Arctic
SpaceX Just Had to Scrub Their Historic Launch. Now What?
5 Ways You Can Help Stop The Coronavirus ‘Infodemic’ That’s Hurting Everyone
A ‘Code’ in Starlight Reflected Off Distant Planets Could Reveal if They’re Habitable
Physicists Create a Group of 15 Trillion Entangled Atoms, Setting a Major New Record