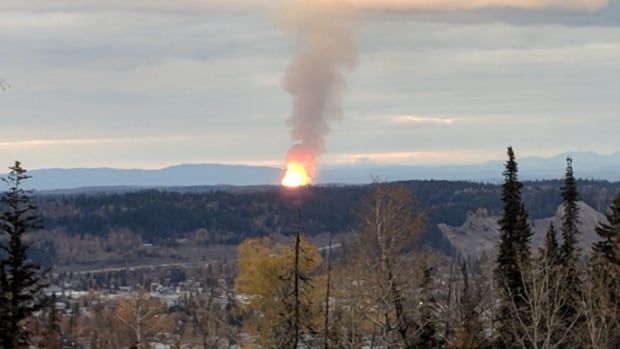 
Residents of a northern B.C. community are being allowed to return home after a natural gas explosion saw homes evacuated Tuesday evening.

Prince George RCMP said an incandescent orange fireball that was seen for kilometres around at approximately 5:30 p.m. PT was from an Enbridge natural gas pipeline exploding in Shelley, about 15 kilometres northeast of Prince George.

Homes within several kilometres were evacuated as a precaution, but people were being allowed to return, police said in a news release at 7:30 p.m. PT. There was no damage to anything other than the pipeline, police said, and no one was injured. The gas has been shut off.

Police said it was unclear what caused the explosion but an update would be provided tomorrow.

Chief Dominic Frederick of Lheidli T’enneh First Nation said about 100 people from his community were forced to flee along with people from a nearby subdivision.

The explosion happened only about two kilometres from the reserve, forcing residents to quickly flee, he said.

“We sort of trained for it … because of the wildfires,” Frederick said of the speedy evacuation. “Everything was just left behind.”

Resident Megan Clark described hearing terrible sounds sounds from her house, located a short distance from where the line exploded.

“I thought it was thunder at first, because it was loud, banging kind of noises,” Clark said. “I look out my window and I see this huge forest fire so I thought maybe a house blew up.”

Clark said once she and her family saw what was happening, they grabbed their pets and a few belongings and ran.

Prince George Mayor Lyn Hall, speaking after an all-candidates forum in the city, said the emergency operations centre was activated for evacuees.

“We’re very concerned about this,” Hall said, adding the focus now would be to keep affected residents informed about the situation.

Michael Barnes, an Enbridge spokesperson based in Houston, said crews are depressurizing the gas lines and have cordoned off the area of the explosion for safety.

Enbridge said in a statement that it will be investigating the cause of the explosion. The National Energy Board tweeted that it has sent inspectors to the scene.

With files from Andrew Kurjata, Lien Yeung and Wil Fundal