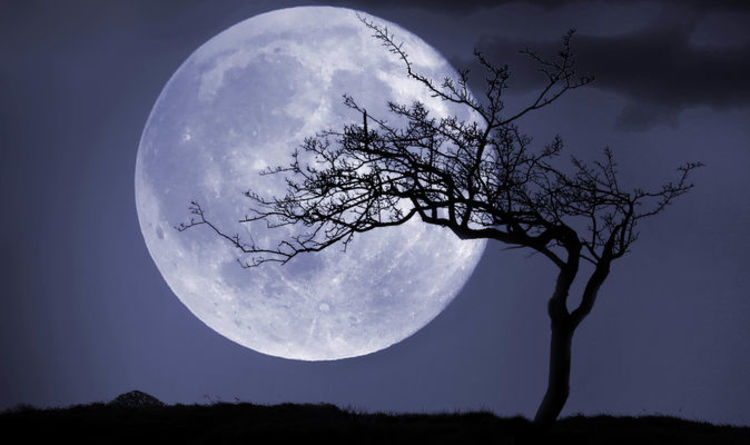 
Many full moons have their own names and October’s is known as the hunter’s moon but it is also called the Travel Moon or Dying Grass Moon.

This year’s Harvest Moon was between September 24 and 24, according to EarthSky.org, meaning the next Hunter’s Moon is tonight.

The moon itself often appears red or orange as it comes quickly after sunset.

Where does the Hunter’s Moon name come from?

The Moon’s name comes from Anglo-Saxon times but is also attributed to Native American tribes.

These tribes would monitor time by observing the moon patterns and four seasons of the year, a process later adopted by colonial Americans.

The Hunter’s Moon marks the start of the hunting season in which meats are preserved for the winter months, presenting a time of reflection.

The name is also said to come from the light of the moon enabling hunters to find hiding nocturnal animals.

What is the spiritual meaning of the October Hunter’s Moon?

Some reports state October is spiritually a month associated with death as its the time of year when the living and the dead come closest together.

But according to Sara Coughlin writing for Refinery29.com, the Hunter’s Moon need not mean death but a just chance for people to embrace change.

She wrote: With that in mind, you can spend October taking steps to safeguard your home and life against negativity, while welcoming in positive change.

“And the night of the full moon, with its expansive and illuminating energy, is the perfect time to perform such a ritual.”

What time is October’s Hunter Moon?

This year’s Hunter’s Moon will be fully illuminated by 5.45pm BST although it will be just below the horizon.

Sky watchers in the UK can still see celestial orb rising over the horizon at about 6.16pm.

Ancient ‘Weird Wonders’ Could Be Leftovers From The Cambrian Explosion : ScienceAlert
Octopus Brains Evolved to Share a Surprising Trait in With Our Brains : ScienceAlert
Alzheimer’s Gene Doesn’t Guarantee Dementia. Here’s What You Can Do to Reduce Risk : ScienceAlert
Rapidly Melting Glaciers Are Releasing a Staggering Payload of Unknown Bacteria : ScienceAlert
The Cause of Alzheimer’s Could Be Coming From Inside Your Mouth : ScienceAlert