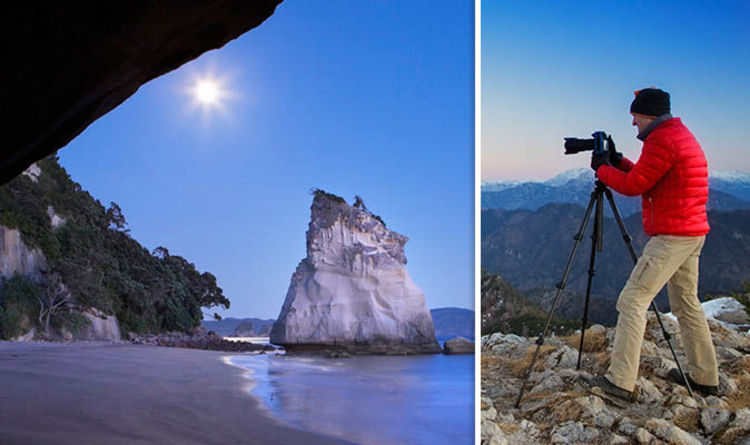 The elusive blue moon is a rare astronomical occurrence when a second full moon rises in the night sky in one calendar month.

But for the first time in 150 years, the blue moon will rise in tandem with a total lunar eclipse, and the conditions are ripe for amazing photos.

The super blue blood moon also marks the second supermoon of the year and briefly during the eclipse will take on a reddish hue – the blood moon.

The lunar spectacle will rise next week on Wednesday, January 31, but unfortunately the total eclipse part of it will only be visible across Asia and swathes  of northwest America.

But for those who will still get to see the blue moon and supermoon next week, Canon ambassador and award winning photographer Mr Noton has shared his best tips to snapping the perfect photo.

Unlike the sun’s position in the sky, the moon’s path will vary to great degrees depending on its latitude and the season.

This can result in big differences in the timing, appearance and trajectory of the moon across the sky. But there are smartphone apps that can sort this problem out.

Mr Noton said: “The Photographer’s Ephemeris is useful for giving moonrise and moonset times, bearings and phases; while the Photopills app gives comprehensive information on the position of the moon in our sky.

“Armed with these two resources, I’m planning to shoot the super blue blood moon rising over the Jurassic Coast in Dorset, England.

“It’ll be a fascinating logistical exercise requiring military precision, although cloud cover often scuppers even the best laid plans. No one said this game was easy.”

2. Grab a lens with an optical zoom

According to Mr Noton, one of the biggest challenges photographers will face on Wednesday is shooting the moon large enough to see its rough surface.

Mr Noton said: “It’s a task normally reserved for astronomers with super powerful telescopes, but if you’ve got a long telephoto lens on a full frame DSLR with around 600 mm of focal length, it can be done, depending on the composition.

3. Steady your camera with a tripod


As you frame up your shot, one thing will become immediately apparent; lunar tracking is incredible challenging as the moon moves through the sky surprisingly quickly


Nothing is more frustrating at times than camera shake leaving your pictures blurry and out of focus. But steadying your camera with a solid tripod can be the solution to keeping your photos sharp, according to Mr Noton.

The photographer said: “As you frame up your shot, one thing will become immediately apparent; lunar tracking is incredible challenging as the moon moves through the sky surprisingly quickly.

“As you’ll be using a long lens for this shoot, it’s important to invest in a sturdy tripod to help capture the best possible image.

“Although it will be tempting to take the shot by hand, it’s important to remember that your subject is over 384,000km away from you and even with a high shutter speed, the slightest of movements will become exaggerated.”

4. Make the moon part of your landscape

Next Wednesday Mr Norton will focus on making the moon an central part of his photography, by integrating it into the background.

He said: “Whilst images of the moon large in the frame can be beautifully detailed, they are essentially astronomical in their appeal.

“Personally, I’m far more drawn to using the lunar allure as an element in my landscapes, or using the moonlight as a light source.

“The latter is difficult, as the amount of light the moon reflects is tiny, whilst the lunar surface is so bright by comparison.

“Up to now, night photography meant long, long exposures but with cameras such as the Canon EOS-1D X Mark II and the Canon EOS 5D Mark IV now capable of astonishing low light performance, a whole new nocturnal world of opportunities has been opened to photographers.” 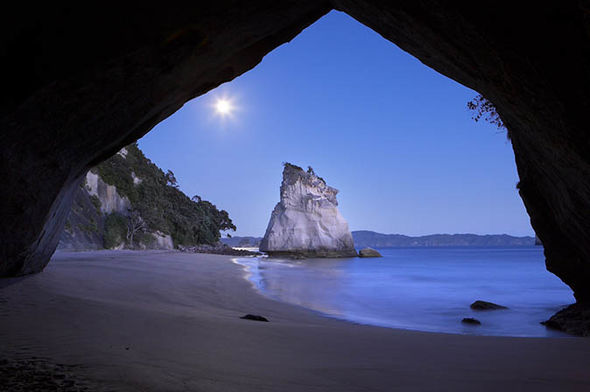 5. Master your shutter speed to stop motion blur and capture the moon

The wildlife photographer’s favourite lunar pictures are ones taken when the light from the moon plays with the twilight sky.

These photos have a “subtle appeal, mood and believability” he said.

According to Mr Noton, the perfect exposure setting to snap a crips photo are a 1/250 sec shutter speed at f8 and ISO 100.

The expert said: “By definition, any scene incorporating a medium or wide-angle view is going to render the moon as a tiny pin prick of light, but its presence will still be felt.

“Our eyes naturally gravitate to it, however insignificant it may seem. Of course, the issue of shutter speed is always there; too slow an exposure and all we’ll see is an unsightly lunar streak, even with a wide-angle lens.”

Mr Noton is a three-time Wildlife Photographer of the Year winner, with a vast portfolio of work and more than three decades of experience in the field.

Diamond From 660 Kilometers Below Earth’s Surface Reveals a Water-Rich Environment : ScienceAlert
Fossil-Filled Australian Caves May Be 500,000 Years Older Than We Thought, Study Finds : ScienceAlert
Deep Brain Simulation Could Alleviate OCD When Other Treatments Have Failed : ScienceAlert
Watch a Tiny Robot Blob Transform Into Even Tinier Bits to Squeeze Through Cracks : ScienceAlert
We Just Got Our Closest View of Europa in 20 Years, And We Can’t Stop Staring : ScienceAlert