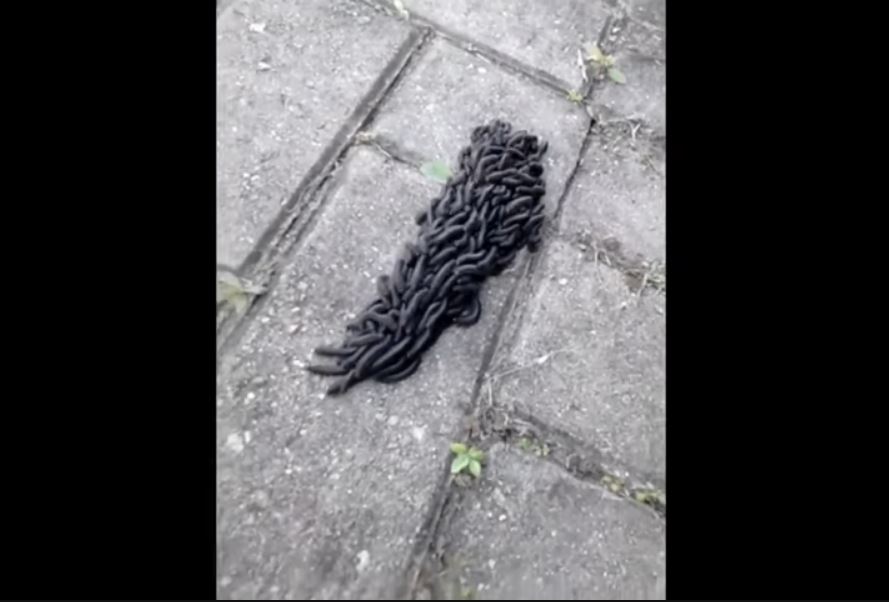 
This is the bizarre moment a huge black ‘monster worm’ squirming along the pavement is revealed to actually be a writhing mass of hundreds of insects behaving as one.

Stunned Tori Silveira, 23, made the mystifying discovery when headed to the supermarket near her home in Santa Catarina, Brazil.

This is really grose. Look closer at this single, living entity… But hey, wait a second! It’s actually made up of hundreds of weird bugs clustered together!

“I was on my way to the supermarket near my house when I noticed this large black mass on the sidewalk that I was on,” Tori Silveira said. “I leaned in to get a better look and saw that it was a bunch of little bugs that I had never seen before around here. My first impression very much ‘woah what the f*** is that?”

“I’d describe it as hundreds of long, black worm-like bugs with tiny legs crawling on top of each other, slowly moving down a sidewalk as if they’re migrating to a new area together,” said Tori. “I’m still not entirely sure what kind of bug they are, some say caterpillar, others say wasp larvae etc. It’s very confusing to me.”

Entomologists at London Zoo examined the footage and were able to shed some light on why the creatures could be moving together:

“They gain more protection by moving as a group when looking for food,” said Dave Clarke, invertebrate team leader.

“They may have been changing nest position – which would explain them being on the ground, and may be huddling together as a defensive reaction.“

“They’re not aggressive – just trying to protect themselves.”

And while the bugs couldn’t be definitively identified from the video alone, Mr Clarke’s team think they may have guessed what they are.

“The team believes these are sawfly larvae,” he said. “As with all videos, we can’t guarantee this is what they are as they’re not directly in front of us to check, but this is what the invertebrate team here at ZSL believe.”

Sawflies are found all over the world, with the largest family of them present on every continent except Antarctica. Females can lay up to 90 eggs at a time and the adult insect typically lives for seven to nine days.