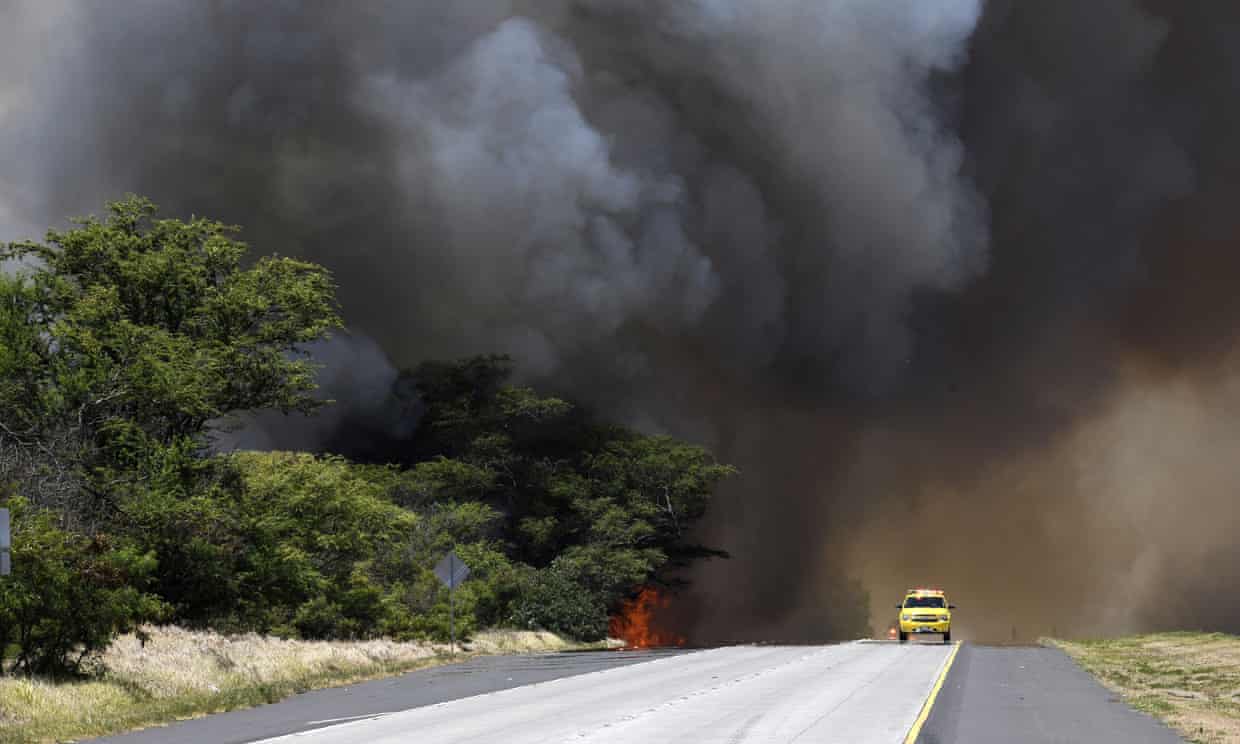 
A brush fire of 1,200 hectares burns out of control through island’s central valley.

Thousands of people on Maui have been ordered to evacuate two towns in the path of a spreading wildfire.

The 1,200 hectare (3,000 acre) brush fire in the island’s central valley was uncontrolled on Thursday night, Maui’s mayor, Mike Victorino, told during a news conference. Firefighters were monitoring it overnight but it was too dangerous to battle in the dark, he added.

What it looked like right before and while @JBahris and I were being #evacuated from the #Fire here in #Maui #Hawaii pic.twitter.com/ul38jUNo68

“We can’t fight the fire tonight,” he said. “We’re not going to send any firefighters into harm’s way.”

So here I am tweeting from a lobby of a random roadside hotel with no vacancy ??‍♀️. Hello from day 1 of vaca #mauifire pic.twitter.com/sMP1HDS01B

Animation of #GOES17 images showing the development of the smoke plume of the #Mauifire?. Made using the excellent SLIDER tool by RAMMB / CIRA. ➡️ https://t.co/oA4BxqH9GQ #Wildfire #RemoteSensing pic.twitter.com/MXGFre0Mg2

The brush fire was reported at about 10.30am and steady winds of up to 20mph fanned the flames, officials said. It jumped a highway and spread across fallow fields and more brush. Two fire department helicopters dropped water on the blaze to try to contain it.

Hopefully nobody has been hurt! #Wildfire #Fire #Firefighting #Hawaii pic.twitter.com/Q0Jclpq9ap

While thousands were ordered to evacuate, it was unclear how many people had left the west Maui coastal towns of Maalaea and Kihei. Three shelters housed about 500 people late on Thursday, media reports said. Maui high school was accommodating about 200 cats and dogs moved from a local animal shelter, the Honolulu Star-Advertiser reported.

Hundreds of people were forced to evacuate due to a massive brush fire burning in central Maui in Hawaii yesterday. https://t.co/Cy9FZdml6K pic.twitter.com/4foSjn27ln

Kahului airport was briefly closed and flights were diverted because of the smoke, which also forced the closure of two major roads. Operations were back to normal around 7pm, media reported. Look at this plane flying through the smoke:

No injuries or damage to structures were reported, but some farm equipment had burned, HawaiiNewsNow reported.

Another fire burning out of control!

Scientists Discover a Weird New Form of Ice That May Change How We Think About Water : ScienceAlert
Bar Graphs Induce a Hidden Bias in Interpretation, Experiment Shows : ScienceAlert
Incredible ‘Fairy’ Robot Sails on The Breeze Like a Floating Dandelion : ScienceAlert
Scientists Are Making Catfish Hybrids With Alligator DNA For Us to Eat : ScienceAlert
A Billion-Dollar Biotech Company Plans to Bring The Dodo Back to Life : ScienceAlert