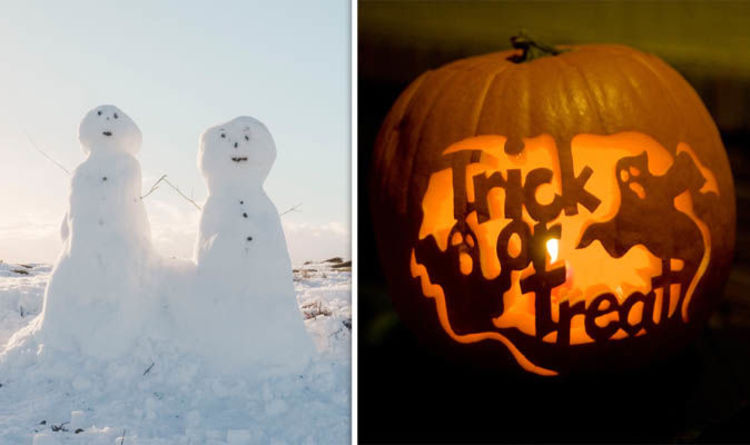 
Each year thousands of children dressed in macabre costumes spook their friends and family in exchange for sweets on October 31.

In popular culture, Halloween is a time to revel in ghastly activities, monster-themed parties and pumpkin carvings.

But the history of Halloween is a lot longer and more complex than many assume and can be traced back to ancient rituals observed after the end of the autumn harvest.

What is the holiday Samhain?

Together with the holidays of Imbolc, Bealtaine and Lughnasadh, Samhain is one of the big four seasonal festivities in Gaelic culture.

Samhain’s roots are traced back to Ireland and Gaelic parts of ancient Britain and France.

The holiday was observed by the Celts at least 2,000 years ago, long before Halloween became associated with carved pumpkins and bats.

According to History.com, the Celts linked the start of the long, cold winter with death.

The history website reads: “Celts believed that on the night before the new year, the boundary between the worlds of the living and the dead became blurred.

On the night of October 31 they celebrated Samhain, when it was believed that the ghosts of the dead returned to earth.

“In addition to causing trouble and damaging crops, Celts thought that the presence of the otherworldly spirits made it easier for the Druids, or Celtic priests, to make predictions about the future.

“For a people entirely dependent on the volatile natural world, these prophecies were an important source of comfort and direction during the long, dark winter.”

Does Halloween and Samhain mark the start of winter?

Despite the spooky holiday’s connection to the coldest of the seasons, the start of winter is still a few months away.

The astronomical start of winter, when the planet’s position in space dictates the changing seasons, does not occur until the Winter Solstice.

This year, the Winter Solstice is expected to fall on Friday, December 21.

The UK Met Office explained: “The astronomical calendar determines the seasons due to the 23.5 degree tilt of the Earth’s rotational axis in relation to its orbit around the Sun.

“Both equinoxes and solstices are related to the Earth’s orbit around the Sun.”

When the Earth’s South Pole is most tilted towards the Sun and the Northern Hemisphere is at its furthest from the star, that is the Winter Solstice.

There is also the meteorological or calendar start of winter, which falls every year on December 1.

Robot Shows It’s Possible to Swim Through The Emptiness of a Curved Universe : ScienceAlert
This Artificial Synapse Can Run a Million Times Faster Than Ones in The Human Brain : ScienceAlert
Scientists Gave Young Mice The Blood of Old Mice. Then Things Got Weird : ScienceAlert
The Moon Stole Something From Deep Inside Earth Eons Ago, and Scientists Can Prove It : ScienceAlert
Deep-Sea Sponges Can ‘sneeze’ Out Mucus, and The Footage Is Weirdly Mesmerizing : ScienceAlert