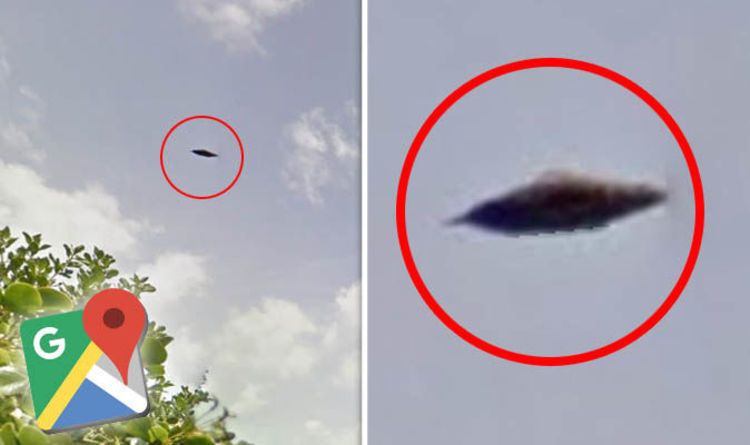 
Google Maps Street View lets users observe the world from street-level and even sometimes discover UFOs in the skies.

In this case, an eagle-eyed Reddit user claims to have found a genuine flying saucer over the paradise island of Bermuda.

The social media user, who has since mysteriously deleted his account, found the bizarre hovering object over the Bermuda Aquarium, Museum and Zoo.

The supposed UFO in question was snapped over Hamilton Parish, Bermuda, near the aquarium’s Caribbean Exhibit.

From a distance, the UFO appears to be flying over Bermuda’s Harrington Sound body of water.

The dark, fast-moving object is shaped very much like a classic flying-saucer-shaped UFO.

Another person, Cohanseybob, said: “There are quite a few on Google Earth. You just have to have a look.”

However, other redditors were quick to point out other more plausible explanations for the object’s appearance.

Many of them suggested the UFO was actually a small bird flying in front of Google’s cameras.

Redditor Taste_the__Rainbow said: “That could easily be a bird.”

Another comment, from user lonchbox, attacked the discovery for asserting it is an extraterrestrial object.

The Reddit user said: “You are more certain it’s a metal saucer than a bird?

“So let me ask. How are you positive regarding that?

“I think that claim warrants a hell of a lot more expanding and clarifying than claiming it’s a bird, which do tend to fly around in the air, in the tropics.”

The supposed UFO discovery is not the first time people have claimed to have found bizarre and unexplained objects on Google Maps.

In March this year, online conspiracists claimed to have found an entire alien spacecraft hiding between two mountains near the South Pole.

Another potential UFO was found on the South Georgia Island, near the icy connect of Antarctica.

However, Dr Richard Waller, an expert at British Keele University, dismissed all claims the object is a UFO.

He said: “It looks to me as though this feature is related to a large avalanche from a nearby mountain.

“Part of a hanging glacier appears to have collapsed, you can see the avalanche debris at the foot of the slope, and this could be a large block of ice that has travelled further as a consequence.

“The track shows that it’s sliding over a snow-covered glacier before it comes to a rest.”

Researchers in South America Discover a New Species of Tiny but Tough Dinosaurs : ScienceAlert
An Experimental Surgical Robot Is Headed to The International Space Station
Astronomers Charted The Sun’s Life, And This Is How The Story Ends : ScienceAlert
Clinical Trial Restored Sight to 20 People With Corneas Made From An Unlikely Source : ScienceAlert
The Moon Stole Something From Deep Inside Earth Eons Ago, and Scientists Can Prove It : ScienceAlert