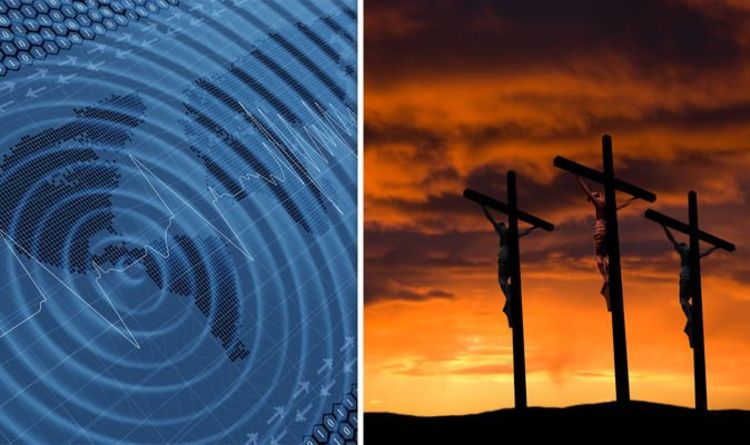 
“Lunar geometry” and the alignment of two planets within our solar system could cause the Easter weekend to begin in almost biblical fashion as a huge tremor is predicted on April 19. The earthquake, according to one forecaster, will be triggered by celestial bodies within our solar system pulling on Earth’s tectonic plates, causing tension to build. If the tension does build, it could be unleashed in catastrophic fashion with a magnitude eight earthquake.

A magnitude eight earthquake is classified as a “great” tremor and can “totally destroy communities near the epicentre”, according to Michigan Tech.

The prediction was made by earthquake ‘forecasting’ website Ditrianum, run by researcher Frank Hoogerbeets, which said: “Critical lunar geometry on the 16th in combination with two planetary alignments on the 17th could trigger large seismic activity from the 16th to the 19th, possibly over 7.5 magnitude and in a worst-case scenario over 8 magnitude.”

If an earthquake were to occur on Good Friday, the similarities with the Bible would be uncanny.

Good Friday is the day in which Jesus Christ was supposedly crucified.

According to the Gospel of Matthew, a major earthquake occurred as Jesus died: “And when Jesus had cried out again in a loud voice, he gave up his spirit. At that moment the curtain of the temple was torn in two from top to bottom. The earth shook, the rocks split and the tombs broke open.”

But experts have previously dismissed Mr Hoogerbeets’ claims, saying there is no way earthquakes can be predicted.

SpaceX’s Starship Prototype Just Erupted in a Dramatic Fireball During Testing
They Did It! SpaceX And NASA Have Made History With First Crewed Launch
Astronomers Confirm The Earth-Sized Planet at Proxima Centauri Is Definitely There
Scientists Just Discovered New Zealand Sits on an Ancient Volcanic Super Plume
We Just Got Even More Evidence Mars Once Had a Ring