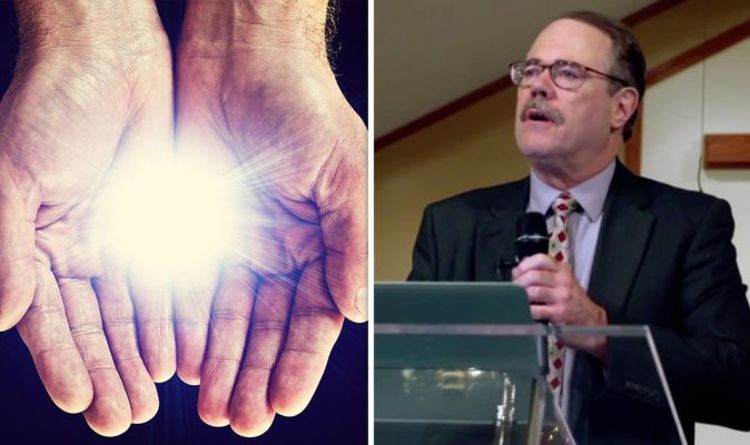 
Tom Renfro noticed a number of lumps on his neck and arms and went straight to the doctors. He was diagnosed as having mantle cell lymphoma, a rare fast-growing disease and doctors gave him months to live. Mr Renfro claims he refused medical attention, instead opting to put his hope in his Christian faith – claiming God would intervene.

He revealed during Morgan Freeman’s National Geographic series “The Story of God” how the story unfolded.

“Later on that fall, I found more under my arms, and so I sought medical attention.

“The biopsy under my arm showed that I had an unusual form of lymphoma called mantle cell lymphoma.

“The prognosis was very poor and they gave me months to live – they told me ‘enjoy what time you have left’”.

Mr Renfro went on to reveal how his family and friends from a local church came together to pray for his health.

He added: “The goal was to stay alive through Christmas, but I was a physician and I knew the evidence that was there.

“I was in multi-organ failure – I had a disease that there was no medicine or cure for that would wipe this disease out.

“I did not have any medical treatment, not at that time and the tumours continued to progress.

“As they progressed, the people came together more and more intense with prayer.

“People would come and pray, sometimes even all night and it was remarkable.”

Mr Renfro then claims to have experience the intervention of God, who told him it was time to go to the hospital.

He continued: “The tumours were the size of apples on my neck and my arms stuck out because of the massive adenopathy under my arms, my abdomen was expanding.

“So they started an infusion and it was like the rock that David threw at Goliath.

“Before the infusion even completed, there was something that changed in my physically.

“The tumours became very soft and started disappearing, it all vanished in 24 hours.”

While mantle cell lymphoma can be treated, it is highly uncommon for it to not return.

Treatment for mantle cell lymphoma depends on how fit you are.

Most people have chemotherapy with an antibody treatment called rituximab.

If possible, there is strong chemotherapy and a stem cell transplant, which could keep mantle cell lymphoma under control for longer.

Newer drugs are increasingly used for mantle cell lymphoma when it comes back.

This Clever Ocean Power Station Harvests Wind, Wave And Solar Energy on One Platform
Humans Are on Their Way to Annihilating 50 Billion Years of Evolutionary History
The Sun Just Spat Out Its Biggest Flare Since 2017
Boys End Up in Hospital After Trying to Gain Superpowers From a Black Widow Bite
If SpaceX’s Rocket Fails, an Emergency Escape System Will Save The Astronauts Onboard