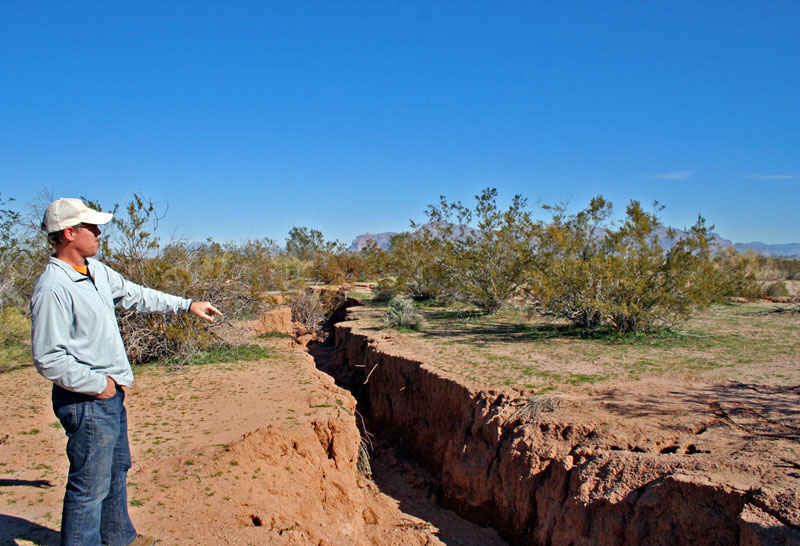 
Some arid valleys of central and southeastern Arizona are home to giant earth cracks that swallow everything on their paths.

Giant cracks do not only open up in Mexico, but also in arid Arizona. These earth fissures pose danger to cattle, wildlife, and unwary humans. And, because they tend to develop perpendicular to surface drainage, they can capture runoff and develop into large gullies.

Most earth fissures in Arizona occur in the corridor between Tucson and Phoenix, and from Phoenix west along interstate 10. Here an example of one of these Arizona giant cracks that opened up on the Navajo Nation ground. The still growing 900 feet long crack is 12 miles north of I-40. It is up to 500 feet deep in places.  The USGS has no real answer other than growing tensions in the local rock formations have caused the cracks to form.

This giant fissure sits east of Flagstaff on Luepp Rd and is about one mile west of Leupp gas station. It’s gotten so big, that they had to fence it in. The large crack has many residents on the Navajo reservation and in the state of Arizona concerned as fears grow over the expansion of the crack.

In 2017, the crack was measuring and amazing 10 feet wide and up to 30 feet deep in some parts and was the largest fissure in the desert of Arizona… and probably still continues to grow:

Finally, with the 2013’s collapse of highway 89 near Page, some local residents wonder what mother nature has in mind for the vast reservation:

So How Do These Arizona Cracks Form?

As explained on the Arizona’s Earth fissure center:

Earth fissures are associated with basin subsidence that accompanies extensive ground water mining. In Arizona, fissures were first noted near Eloy in 1929. Their physical appearance varies greatly, but they may be more than a mile in length, up to 15 ft wide, and 100s of feet deep. During torrential rains they erode rapidly presenting a substantial hazard to people and infrastructure. Moreover, fissures provide a ready conduit to deliver runoff and contaminated waters to basin aquifers. Rapid population growth in southern Arizona is increasingly juxtaposing population centers and fissures.

Giant desiccation cracks are common in southwestern U.S. playas and have been reported in several areas of Arizona but they are much more common than previously recognized. These giant cracks are similar to mudcracks or large soil cracks, but on an enormous scale. The cracks themselves are up to 3 feet (1 m) wide, up to 9 feet (2 m) deep (apparent depth), and a few are on the order of 1000 feet (300 m) long. They form polygonal blocks that look identical to the shape of mudcracks, but the polygons are characteristically 150-600 feet (45-180 m) across whereas typical mudcracks form polygons 4-8 inches (10-20 cm) across and large soil cracks form polygons 2-6 feet (0.5- 2 m) across. Some giant desiccation cracks are large enough to be mistaken for earth fissures that are caused by subsidence from groundwater pumping.

According to the U.S. geological survey, earthquakes come and go in the northern parts of Arizona, which also covers the reservation, it’s not big enough to rattle down buildings, but maybe to create those cracks.

In any cases these cracks are gradually swallowing and tearing the instabile limestone ground of Arizona.

An Expert Explains Why The Radioactive Water Stored at Fukushima Should Be Released : ScienceAlert
People Who Don’t Exist Look More Real Than Actual People, Study Finds : ScienceAlert
These 5 Traces of Ancient Ancestors Still Exist in Human Bodies Today : ScienceAlert
This Physicist Says Electrons Spin in Quantum Physics After All. Here’s Why : ScienceAlert
Scans of Mummified ‘Golden Boy’ Reveal He Was Covered in Magical Protections : ScienceAlert