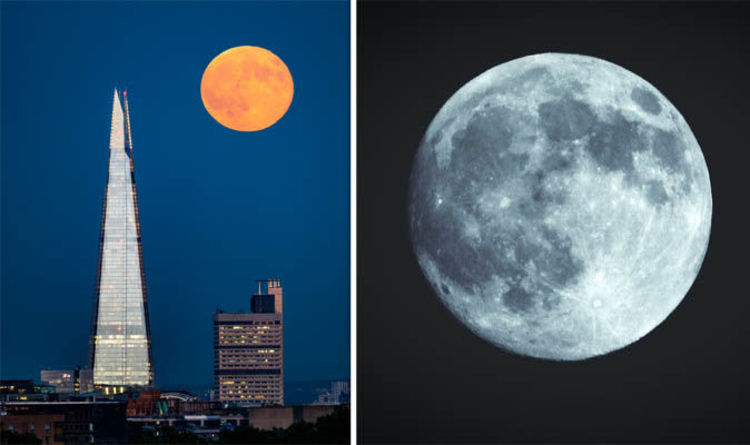 
The New Moon completely vanished from sight on the morning of Tuesday, October 9, with the Sun-lit side facing away from Earth.

Stargazers hoping to catch a glimpse of the Moon tonight will be disappointed as only about two percent of the lunar globe will be illuminated.

Tonight, the Moon will look like nothing more than a sliver of crescent-shaped moonlight.

The good news is the Moon’s light will grow in size over the next two weeks as we head towards the October Full Moon.

When is the October Full Moon?

The lunar orb’s glowing side will slowly turn around to face the planet once again by the night of October 24.

On the night of the Full Moon, the Moon will appear to be 100 percent illuminated, brilliantly lighting up the skies.

When observed from London, the Full Moon will appear to peak around 5.45pm BST – about 30 minutes before it peaks over the horizon.

The Moon will rise up in the skies at around 6.16pm BST in the east-northeast sky.

On the day just before and just after the Full Moon, the orb will look equally stunning with about 98 percent of illumination.

How to see the October Full Moon?

This month, the Full Moon will rise in the eastern skies around the time of sunset and sets in the west around sunrise.

Astronomer Bruce McClure of EarthSky.org said: “If you watch the moonrise each day this coming week, you’ll see the moon rising farther north – or farther left – along the eastern horizon.

“At temperate and Arctic latitudes in the Northern Hemisphere, the northbound moon will rise sooner than the average 50 minutes later for the next several days.

“At temperate and Antarctic latitudes in the Southern Hemisphere, on the other hand, the northbound moon will rise later than the average 50 minutes later.”

Why is the October Moon known as the Hunter’s Moon?

In many Native American cultures, the different full-phases of the Moon were named after changes in the landscape and the seasons.

The June Full Moon, for instance, is known as the Full Strawberry Moon due to ripening fruit in the wild.

The August Sturgeon Moon, on the other hand, signalled large numbers of wild fish in the US Great Lakes were ready to be caught.

“This was the traditional time of year for hunting and slaughtering in preparation for the coming winter.”

The November Full Moon, which falls on November 24, is known as the Beaver Moon because it was the time when Native Americans set beaver traps out in the swamps.