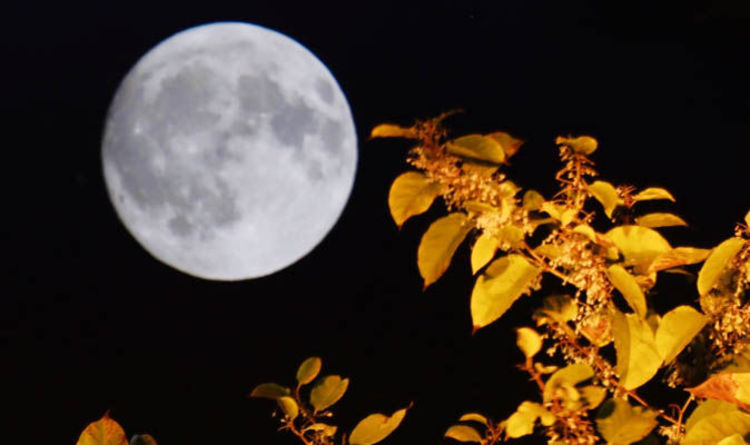 
The so-called Flower Moon peaks tonight (Tuesday, May 29) over the US and Europe at different times.

The full moon rose over the US in the morning hours around 10.20am Eastern Time and will soon rise over London, UK, around 3.19pm UK time.

The Flower Moon is the sixth out of 13 full moons to rise this year and is hot on the heels of the April 29 Pink Moon.

However many astronomy enthusiasts hoping to catch a glimpse of the lunar spectacle tonight are puzzled about the moon’s name.

What does the Flower Moon’s name mean?

According to the Royal Observatory Greenwich in London, various cultures around the globe refer to the May full moon as the Flower Moon because of the plants blooming throughout spring.

Other known names associated with the May full moon are the Corn Planting Moon, the Milk Moon and even the Dragon Moon.

The Old Farmer’s Almanac, which is a staple guidebook for farming, astronomy and folklore, said the moon’s name is steeped “rich in history”.

The Almanac said: “We use Full Moon names that were used during Native American and Colonial times to help track the seasons.

“Depending on the tribe, May’s Full Moon was called the Full Flower Moon as well as Mother’s Moon, Milk Moon, and Corn Planting Moon.

“The May Moon marked a time of increasing fertility, with temperatures warm enough for safely bearing young, a near end to late frosts, and plants in bloom.”

Different tribes would give the moons different names to keep track of time and the seasons.

The Almanac explained: “The early Native Americans did not record time by using the months of the Julian or Gregorian calendar.

“Many tribes kept track of time by observing the seasons and lunar months, although there was much variability.

“For some tribes, the year contained 4 seasons and started at a certain season, such as spring or fall. Others counted 5 seasons to a year.

“Some tribes defined a year as 12 Moons, while others assigned it 13.”

The full moon names used in The Old Farmer’s Almanac come from the Algonquin tribes, one of the most populous Native American tribes living in regions from New England to Lake Superior.

They are the names most often adopted by Colonial Americans over the years.

The next full moon will rise on June 28 and is known as the Strawberry Moon since it signalled to the Algonquin tribes the time was right to gather ripe strawberries in the wild.

Here is a list of all full moons this year: