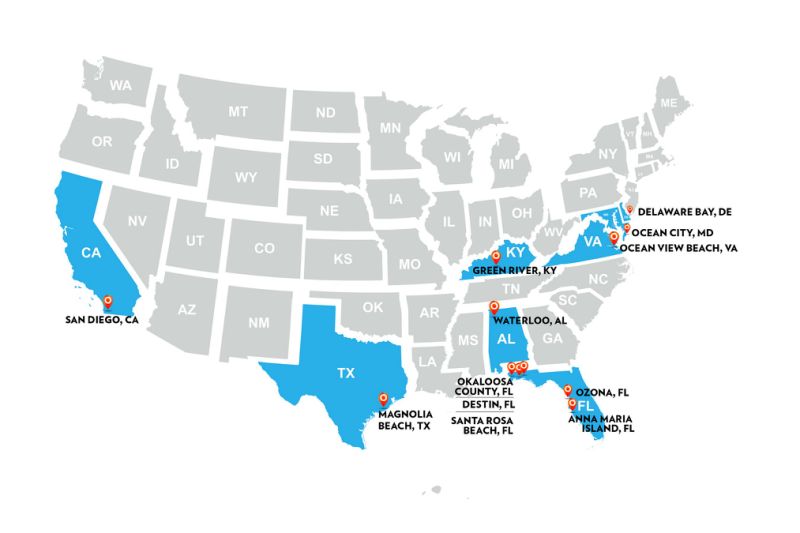 
Each summer, as the waters along the U.S. coastline heat up, cases of flesh-eating bacteria start to grow.

The parasite thrives in water with temperatures that stay above 55 degrees year round, making the southern portion of the Atlantic coastline a common source of cases.

In 2019, several people or their families have spoken out about contracting a flesh-eating bacteria. In most cases, after a day out on the water in places like Florida, Texas and Maryland, they required a significant hospital stay and often surgery.

For three people, they sadly died after contracting the most severe type of flesh-eating bacteria, necrotizing fasciitis — a rare but deadly disease where the bacteria attacks the skin and soft tissue, causing it to decay and leading the organs to shut down.

Of the reported cases, six occurred in the Gulf of Mexico, where flesh-eating bacteria, especially the vibrio species, have thrived for years because of the year-round warm waters. In April, a man fishing in Ozona, Florida, contracted the bacteria. Two months later, the same thing happened to a 12-year-old girl vacationing in Destin, Florida. Just a few days later, a 77-year-old woman died after walking along Coquina Beach on Anna Maria Island in the same state.

After the Fourth of July weekend, five people developed flesh-eating bacteria — a man in Santa Rosa Beach, Florida, a woman in California, and two men who died from necrotizing fasciitis, one in Okaloosa County, Florida and another on Magnolia Beach in Texas.

Cases from other areas include one in Waterloo, Alabama, along the Tennessee River, another at Ocean View Beach near Norfolk, Virginia, one in Ocean City, Maryland and another from the Green River in Kentucky.

While most cases are in the southern part of the Eastern Seaboard, the flesh-eating bacteria vibrio is spreading north. Between 2017 and 2018, there were five cases where people contracted the bacteria in the Delaware Bay, or near Delaware and New Jersey.

“We believe that clinicians should be aware of the possibility that V. vulnificus infections are occurring more frequently outside traditional geographic areas,” the authors wrote.

Still, the most deadly form, necrotizing fasciitis, is very rare, with just 20,000 cases a year, and people should not spend their lives fearing the water. Chances of contracting it is unlikely, especially if you’re healthy and have a strong immune system.

Practicing good hygiene is crucial in prevention. Make sure to shower after going in the water, and properly care for any and all wounds — which includes keeping them covered with dry, clean bandages. Those with open wounds and active infections should avoid bodies of water, especially swimming pools and hot tubs.

Wildfire Destruction in The Western US Has Doubled in Just 10 Years : ScienceAlert
Scientists Are Making Catfish Hybrids With Alligator DNA For Us to Eat : ScienceAlert
More Life Than We Ever Realized Could Survive in The Deep Dark of The Ocean : ScienceAlert
Super-Rare Star System Is a Giant Cosmic Accident Waiting to Happen : ScienceAlert
Astronomers Pinpoint The Mysterious ‘Engine’ of a Super-Powerful Intergalactic Light : ScienceAlert