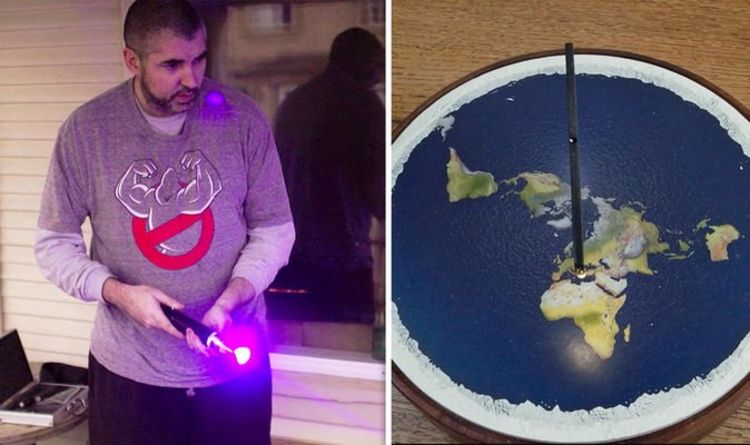 The Flat Earth model is the highly discredited idea that promotes the misconception that the Earth is flat. This theory dates back centuries but was made famous again thanks to the creation of the Flat Earth Society by Samual Shenton in 1956. However, despite the ludicrous nature of the claims, the group still has a large following – putting on regular conventions and meet-ups for members.

During Netflix series, “Behind The Curve”, one group decided to perform an experiment that would put an end to all the conspiracy theories.

Jaren Campanella, who led the investigation, decided the best way to prove the Earth was flat would be using a laser.

The team placed three panels at equal distance along a river and fired the laser to see whether it hit the same spot.

However, they faced a problem straight from the off.

Bob Knodel, who was tasked with watching the middle panel, revealed how the laser had expanded in just the short distance to where he was standing.

Jaren used a laser to try and prove his theory (Image: AMAZON PRIME)

People are leaving, they are all leaving

“We need you to narrow the beam.

“The beam is taking up the whole panel.”

Mr Campanella and his peers then proceeded to play around with the technology, with no luck.

The group fired a laser at three boards (Image: NETFLIX)

The laser beam was too big to be able to measure (Image: NETFLIX)

Then, clearly frustrated by the lack of success, the Flat Earthers shockingly abandoned Mr Campanella.

Melissa Campanella, his wife, revealed to the camera: “People are leaving, they are all leaving.

“I think we should leave too, it takes two hours to get home.

“You need to figure out how to use the laser.”

Mr Campanella then admitted he needed to go back to the drawing board with his idea.

“We just got to figure out a way to make it work.”

The experiment comes after Mr Knodel revealed during the same show how another member of the society had spent £15,250 on trying to prove his theory.

He said: “If the Earth is spinning at one rotation every 24 hours, that means that every hour it has to turn 15 degrees.

Bob Krodel had his own experiement (Image: NETFLIX)

The Flat Earth theory was made popular again in modern times (Image: GETTY)

“If a gyroscope is mounted anywhere on Earth it’s going to drift.

“In today’s navigation systems they’re using what is called a ring laser gyroscope – it is extremely precise.

“If we could simply get one of these, we could prove once and for all, that there is no rotation.

However, despite what would appear to be a huge setback during testing, Mr Knodel is still hopeful.

He explained: “What we found is when we turned on that gyroscope, we found we were picking up a drift of 15-degrees per hour.

“Obviously we were taken aback by that, it’s kind of a problem, right?

“We are obviously not willing to accept this, so the next thing we are going to try is encasing the entire apparatus in bismuth.”

Neil Degrasse Tyson had no time for the claims (Image: COMEDY CENTRAL)

He said: “This whole thing is just a symptom of a larger problem.

“There is a growing anti-intellectual strain in this country that may be the beginning of the end of our informed democracy.

“And by the way, this is called gravity.”

Mr Tyson then dropped his microphone and walked off, demonstrating how anything with a mass or energy is brought together by the natural force.

His action disproves the Flat Earth theory because if the Earth was a disc, we would be constantly pulled to the centre.

Because it is a sphere – a constant shape – no matter where you stand, you have the same amount of mass under you.

This means gravity will pull anything on the surface of the sphere straight down toward the centre.

Strange New Species Discovered in Abyss at The Bottom of The Pacific Ocean
Experts Warn 40°C Summer Temperatures Could Be Common in UK Sooner Than We Thought
New Analysis Says Coal’s Hit a ‘Tipping Point’ And No Longer Makes Financial Sense
Hundreds of Elephants Have Died in Botswana, And We Don’t Know Why
Uganda’s Infamous ‘Selfish’ Tribe Has Been Misunderstood For Almost 40 Years