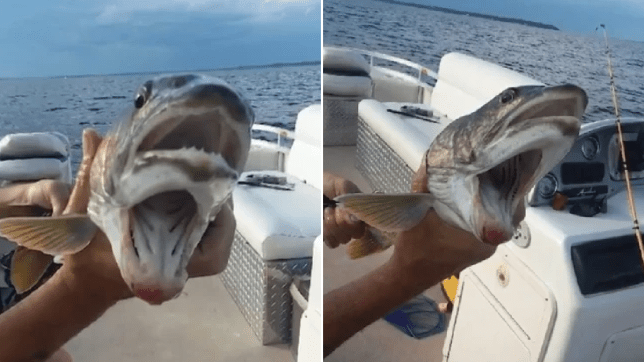 Look at this lake trout hooked at Lake Champlain… It has two mouths.

Debbie Geddes, while fishing with her husband at Lake Champlain in North America, caught a fish with two mouths… And the internet went crazy!

According to comments, the second mouth is not actually a mouth but a hole that is the result of an injury caused by a hook when the fish was probably caught and released in the past.

And what about mutation caused by dangerous pollution?

Although very weird, this is not the first time a fish with two mouths has been caught. Another one was fished in Lake Boney, Australia in 2015.

And it wouldn’t be either the first time that a mutated fish was captured. Back in 2011, a three-eyed wolf fish was hooked in a lake near a nuclear reactor near Cordoba, Argentina.

What do you think now? Was this fish with two mouths either injured or did it mutate?

Hypertension Drug Shown to Extend Lifespan And Slow Aging in Animals : ScienceAlert
There’s a ‘Lost City’ Deep in The Ocean, And It’s Unlike Anything We’ve Ever Seen : ScienceAlert
Earth’s Inner Core May Right Now Be in The Process of Changing Direction : ScienceAlert
Physicists Break Record Firing a Laser Down Their University Corridor : ScienceAlert
Mysterious ‘Zone of Uncertainty’ Inside The Brain Reveals a Surprise : ScienceAlert