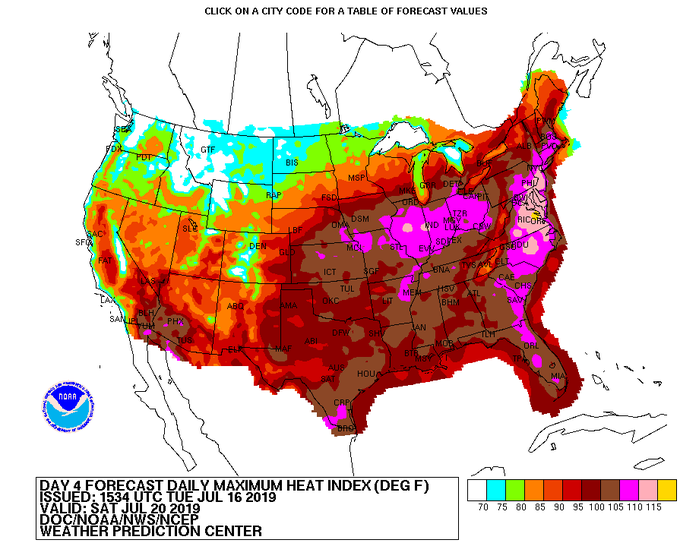 
Two-thirds of the United States is set to experience a “dangerous and widespread” heat wave this weekend.

Temperatures are expected to rise above 100 degrees in many parts of the midwest and the East Coast, affecting millions of people.

“A large ridge of high pressure extending from the Central to Eastern U.S. will deliver a dangerous summer heat wave through the weekend. Widespread excessive heat warnings and heat advisories already cover the Eastern two-thirds of the country. A number of record highs and overnight warm minimum temperatures are likely. Heat indices will surge past 100 degrees and approach the 110s.”

A scorching #heat wave will consume about two-thirds of the country mid to late week into the weekend. About a total of 20 to 30 record highs are possible this #Friday and #Saturday, from the Front Range of the south-central Rockies to the East Coast. #heatwave pic.twitter.com/VtrTlIbWsb

The weather service has issued heat advisories and excessive heat warnings — meaning the maximum heat index temperature is expected to be at least 100 or 105 degrees, respectively, for at least two days, with night temperatures remaining above 75 degrees — throughout much of Iowa, Missouri, Arkansas, Illinois, Nebraska and Kansas.

The heat is on! Millions will endure a heat wave later this week. Warm overnight lows will provide no relief.

Extreme heat is dangerous. Please visit https://t.co/L4FyvSS6lj for information on how to protect yourself and others.

This other map is really impressive too:

Look at the impressive and widespread coverage of #heat related warnings and advisories across the Eastern two-thirds of the country. The hazy, hot and humid conditions will persist through the weekend. Be smart and stay cool! #HeatSafety pic.twitter.com/hemIJ79rOr

There are also heat advisories for eastern parts of Virginia, North Carolina, South Carolina, Delaware and New Jersey, with an excessive heat warning in the Philadelphia area.

Extreme heat causes more fatalities than any other weather hazard in the country, including hurricanes and tornadoes, according to U.S. Natural Hazard Statistics.

And scientists have warned that incidents of extreme heat are likely to occur even more frequently and for longer periods of time in the near future.

In preparation for this weekend, Philadelphia, Chicago and New York City are operating cooling centers as they expect “extremely dangerous heat.”

Officials are encouraging people to stay in an air-conditioned place, remain hydrated, check on neighbors who might be especially vulnerable to heat and be careful about strenuous outdoor activities.

Sword Mistaken For Replica Is Actually An Ancient 3,000-Year-Old Weapon : ScienceAlert
Dogs Can Be Aggressive For Lots of Reasons, And One of Them Is You : ScienceAlert
Lightning Strikes Create a Strange Form of Crystal Rarely Seen in Nature : ScienceAlert
One Simple Idea Makes It Much Easier to Manage Your Weight Over Time : ScienceAlert
Scientists Create Shapeshifting Humanoid Robot That Can Liquefy And Reform : ScienceAlert