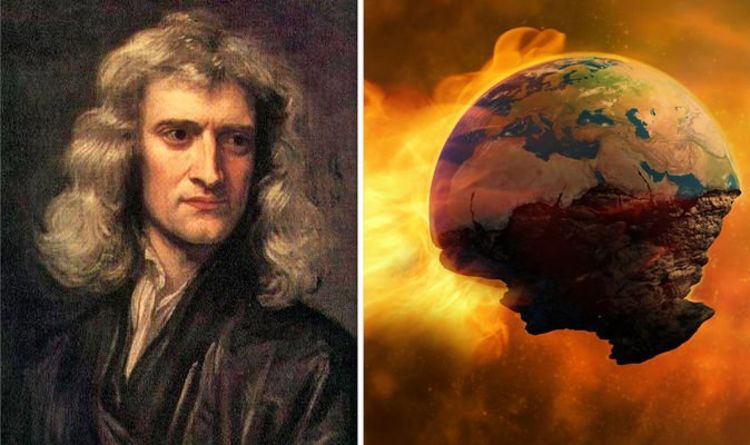 
Sir Isaac was a legendary English mathematician, physicist and astronomer, widely recognised as one of the most influential scientists of all time. His book, “Philosophiae Naturalis Principia Mathematica,” published in 1687, laid the foundations the laws of motion and universal gravitation, which is said to have been inspired by an apple falling from a tree. However, it would appear Newton was just as in touch with his religious side as he was with his scientific.

Resurfaced papers, which were first discovered in the trunk at the house of the Earl of Portsmouth in 1969, reveal he believed the apocalypse would come exactly 1,260 years after the foundation of the Holy Roman Empire.

In a letter from 1704, which went on show in Jerusalem’s Hebrew University in 2007, Newton uses the Bible’s Book of Daniel to calculate the date for the end of the world.

The note reveals a deeply spiritual side to a man more usually regarded as a strict rationalist.

He confidently stated in the papers that the Bible proved the world would end in 2060, adding: “It may end later, but I see no reason for its ending sooner.

“By doing so they bring the sacred prophesies into discredit as often as their predictions fail.”

The exact words from the Book of Daniel that inspired his prediction are not clear.

However, he promises the end days would see “the ruin of the wicked nations, the end of weeping and of all troubles, the return of the Jews (from) captivity and their setting up a flourishing and everlasting Kingdom.”

Yemima Ben-Menahem, one of the curators of the exhibition, said in 2007: “These documents show a scientist guided by religious fervour, by a desire to see God’s actions in the world.”

JUST IN: How missing secret Sphinx was discovered 400 miles from Great Pyramid