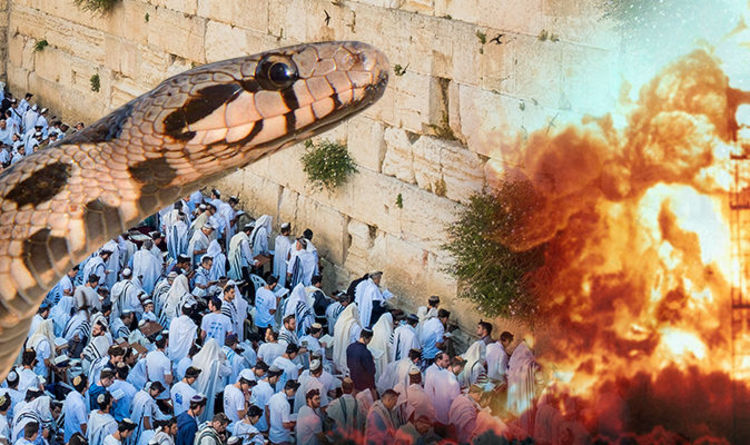 
The birth of a red heifer in Israel, the Dead Sea replenished with fish and a snake slithering out of Israel’s Western Wall – these three unusual events have all been listed as signs of the end times in holy scriptures.

What some believe to be the first sign of the end of the world took place in September.

The Temple Institute, an organisation based in Jerusalem dedicated to teaching the significance of the city’s Holy Temple, announced via YouTube the birth of the “first red heifer in 2000 years”.

The video shows the calf with its mother, and a voice can be heard saying: “A perfectly red heifer was born in the land of Israel.”

The institute added red heifers bring “the promise of reinstating Biblical purity to the world”.

This type of red cow is a rare breed and was the chosen one by priests for sacrifices, according to the Jewish Bible.

The birth and sacrifice of a red cow preceded the construction of the Third Temple in Jerusalem in end—of-times tales – after the previous two had been destroyed.

Its rebuilding happened just before the coming of the Jewish Messiah, but some theologists believe the Third Temple is linked to Judgement Day, or the second coming of Jesus Christ, according to some Christian denominations.

The event represents the final and eternal judgement by God – punishing or glorifying souls according to their behaviours in life.

The Institute, after the examination, deemed the cow a “viable candidate for the Biblical red heifer”, Breaking Israel News said.

The second apocalyptic sign consists of the sighting of fish in the Dead Sea, a body of water with a salinity so high it makes life there almost impossible.

However, Israeli photojournalist Noam Bedein claimed to have seen fish and other forms of life in sinkholes.

Describing the sea “anything but dead”, he told Breaking Israel News this new life in the body of water should be considered the “eighth wonder of the world.”

However, a similar event has been described by an Old Testament prophet, Ezekiel, as a sign of the end of time.

According to Ezekiel 47: 8-9, ahead of Judgement Day “there shall be a very great multitude of fish”.

The third sign of the Apocalypse sparked “panic and embarrassment” according to The Times of Israel.

A snake slithered out from stones above the women’s prayer section at the Western Wall in Jerusalem on October 31.

This weird event sparked speculation among bloggers and online commentators the snake is a symbol we are living in “dangerous times” and that “we are all being warned”.

This difficult period will lead, they continued, to the second coming of the Messiah.

Other internet users also drew a connection between the reptile that tempted Adam and Eve in the Garden of Even, as written in the Bible.

Scientists Glimpse Incoming Asteroid Just Hours Before It Makes Impact : ScienceAlert
These Mysterious Fungi Belong to an Entirely New Branch on The Tree of Life : ScienceAlert
Alzheimer’s Gene Doesn’t Guarantee Dementia. Here’s What You Can Do to Reduce Risk : ScienceAlert
The FDA Just Approved The Most Expensive Drug in The World : ScienceAlert
10 Days After Its Launch, Orion Has Successfully Entered Lunar Orbit : ScienceAlert