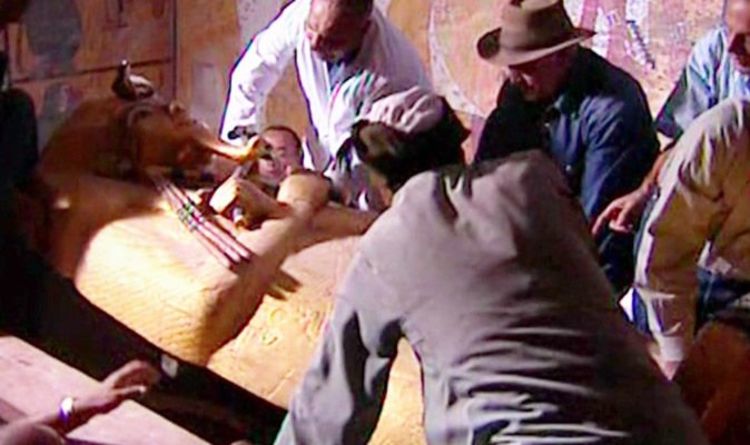 
The curse of the pharaohs is an alleged spell said to be cast upon any person who disturbs the mummy of a powerful Egyptian. This curse, which apparently does not differentiate between thieves and archaeologists, is said to cause bad luck, illness or even death. Since the mid-20th century, many historians have even argued the curse is real, due to the unexplainable circumstances that occur after the ancient coffin.

For many years, pharaohs were buried in the Valley of the Kings on the banks of the River Nile in Egypt, with 64 tombs already opened.

However, Netflix documentary series “Top 10 Secrets and Mysteries” series revealed how one discovery left researchers both baffled and terrified.

“The famous tomb of Tutankhamun was discovered in 1922,” the 2017 documentary detailed.

“Soon after the discovery, mysterious deaths were reported among the team of archaeologists who found the tomb.

“The deaths were ascribed to a curse cast by the pharaohs to ward off grave-robbers.

“Most of the deaths can be explained medically, however, of the 12 people present during the opening of the sarcophagus, six died mysteriously within a few months.”

They are aware that bacteria active in the decomposed organic material can enter open wounds and spread infection.

However, not all deaths can be accredited to this, in addition to the bizarre experiences some researchers still have following the openings.

Some have detailed how they experienced very vivid dreams, claiming to be “haunted” by the mummies they apparently disturbed.

Mummies With Golden Tongues Discovered in Ancient Egyptian Necropolis : ScienceAlert
Cannabis For Pain Relief? Review of 20 Studies Provides Sobering Results : ScienceAlert
Oldest Known Dog Bone Hints Our Best Friends Were With Us Earlier Than Thought : ScienceAlert
Octopus Brains Evolved to Share a Surprising Trait in With Our Brains : ScienceAlert
The Science Behind Why You Sprain Your Ankle So Often, And What You Can Do About It : ScienceAlert