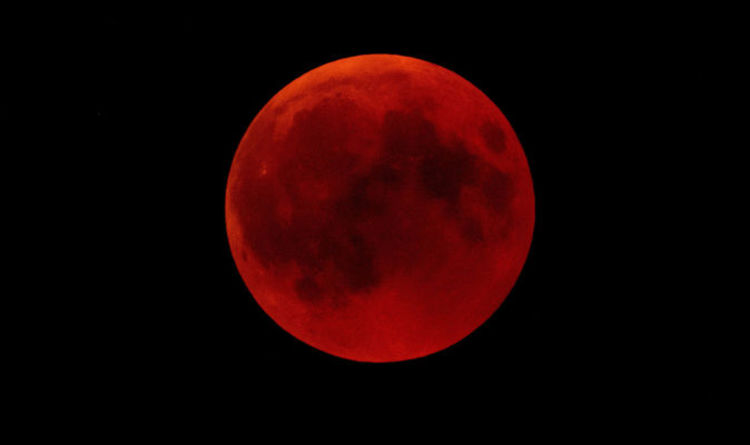 
1) What is a lunar eclipse? A lunar eclipse happens when the Earth comes between the Sun and the Moon and covers the Moon with its shadow, turning it red.

The fullest eclipse, at 2022 GMT, was visible from Europe, Russia, Africa, the Middle East, much of Asia and Australia though clouds blocked out the moon in some places.

The total eclipse will last 1 hour, 42 minutes and 57 seconds, though a partial eclipse precedes and follows, meaning the moon will spend a total of 3 hours and 54 minutes in the earth’s umbral shadow, according to NASA.

The Blood Moon captivated the world tonight but sky gazers in the UK were left disappointed as cloudy skies obscured the spectacle.

Shortly before 9pm, the Moon moved into the shadow of Earth for the longest lunar eclipse of the 21st century.

Reuters photographers charted the moon’s rise across the world, from the Sheikh Zayed Grand Mosque in Abu Dhabi to the Temple of Poseidon in Cape Sounion, near Athens.

In Nairobi, Kenyans watched as the moon darkened. Teddy Muthusi, as he watched from Uhuru Park in Nairobi, said: “This is what life is all about: Magical moments like this.
“It’s just beautiful. It’s well worth it.”

On the banks of India’s Ganges, temples were closed ahead of eclipse.

According to some Hindu beliefs, celestial bodies such as the sun and moon emit negative energy during an eclipse and so some temples in India were closed to minimize any disturbance.

Robert Massey, deputy executive director of the Royal Astronomical Society, who watched the eclipse from the Mediterranean Sea, said: “There is no reason to believe that blood moons foretell doom.

“This does not herald the apocalypse: seeing a lunar eclipse and Mars in the sky is something people should enjoy rather than worry about.”

In Singapore, enthusiasts watched through telescopes at the Marina South Pier. Hundreds of people in Australia paid to watch the eclipse from the Sydney Observatory before sunrise.

Biology Inspires a New Kind of Water-Based Circuit That Could Transform Computing : ScienceAlert
La Niña’s Shock Return Suggests Important Details Are Missing in Climate Models : ScienceAlert
It Turns Out There Is Such a Thing as Good Gossip, According to New Research : ScienceAlert
Scientists Win Physics Nobel Prize For Proving Einstein Wrong : ScienceAlert
Discovery of a New Rare Blood Type Could Save The Lives of Future Newborns : ScienceAlert