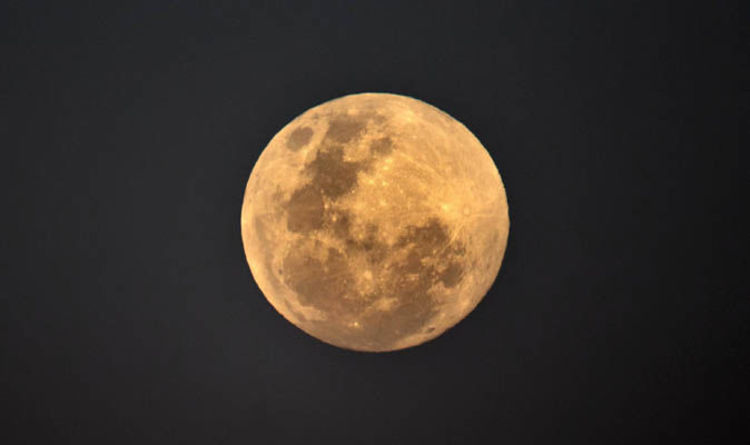 The lunar eclipse kicked off at 5.14pm Universal Time (6.14pm BST) when the July full Moon entered the Earth’s region of faintest shadow, the penumbra.

But the real eclipse spectacle started at 6.24pm UT (7.24pm BST) when the Earth’s darkest shadow slowly began eclipsing the glowing face of the moon.

Thereafter totality occurred when the entire face of the moon disappeared into the shadow and reappeared as the ominous Blood Moon.

This year totality will clock in at one hour and 43 minutes, making the July Blood Moon the longest total lunar eclipse of the 21st century.

The eclipse will feature mainly in the Eastern Hemisphere, over Central Asia and Eastern Africa, but stargazers in Europe, Southeast Asia, Australia and parts of South America will see the eclipse at moonrise or moonset.

Below are the last lunar eclipse updates as the Moon crosses paths with the Earth’s shadow.

The Blood Moon was spotted rising above the temples of Ancient Greece, including the temple of Apollo in Corinth.

The lunar spectacle was also pictured next to the statue of ancient Greek god Apollo in central Athens.

The Blood Moon was visible above the city of Amman in Jordan (Image: REUTERS)

11.20pm: Lunar eclipse visible over Europe and the Middle East

Stargazers enjoyed perfect views of the lunar eclipse in many European destinations.

The Blood Moon rose above the Swiss Alps and was clearly visible in Germany.

The lunar spectacle was also visible in the Middle East, with the moon rising clearly above the city of Amman in Jordan.

9.21pm: Eclipse obscured by poor weather conditions in the UK

Moon-gazers across the UK are complaining about cloudy skies and rainy weather obscuring the Blood Moon from sight.

Rosie Del Rey, @StilinskiRosie, tweeted: “Why does the UK have to be cloudy on the day of the lunar eclipse. Ugh.”

Gemma, @gemmasarney, posted: “Longest lunar eclipse and Blood Moon of the century, trust the UK to be cloudy.”

The July full Moon has just reached totality and the breathtaking Blood Moon is now fully bathed in the Earth’s darkest shadow, the umbra.

The Blood Moon now glows with a deep red colour and will move across the Earth’s umbra for one hour and 43 minutes.

Once the Blood Moon leaves the umbra, the Moon will return to the partial eclipse phase and penumbral eclipse thereafter.

By around 12.30pm BST the Moon will return to its regular white glow. 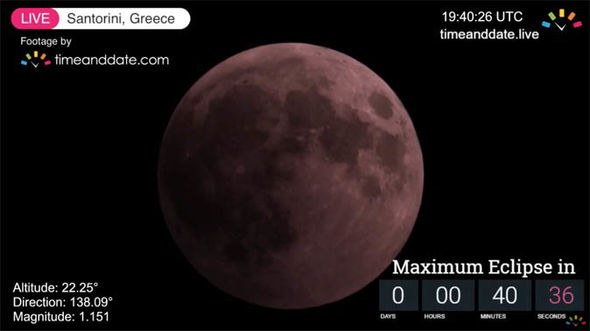 Eclipse 2018: The Blood Moon has finally arrived and can be seen from a Greek observatory (Image: TIME AND DATE)

Telescopes in Australia have picked up the intense red sunlight which characterises the ominous Blood Moon lunar eclipse.

Courtesy of Jonathan Bradshaw, the eclipsed full Moon appears to glow a deep red colour across one half of the Moon.

The other half of the Moon is still glowing white but will soon be swallowed up by the Earth’s shadow when totality starts.

The red colour of the Blood Moon is caused by an effect known as Rayleigh Scattering, which refracts sunlight in earth’s dusty atmosphere. 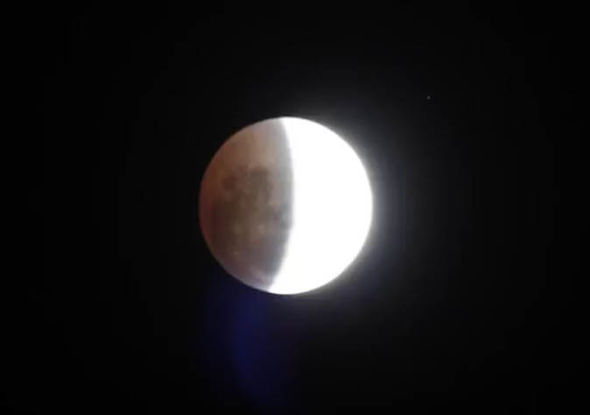 Eclipse 2018: The eclipsed Moon is slowly taking on a blood-red colour in the Earth’s umbra (Image: JONATHAN BRADSHAW/SLOOH)

7.47pm: Hundreds of eclipse photos flood from around the Earth

Before the full Moon entered the Earth’s penumbral shadow, thousands of astronomy boffins around the globe took the streets to photograph the Moon.

One picture snapped in Cape Sounion, near Athens, captured the Moon in its full glory against the ancient ruins of the Temple of Poseidon.

In Berlin, Germany, hundreds of people were photographed on the seers of the German capital bidding the sun goodbye in anticipation of the Blood Moon.

In Tsim Sha Tsui, Hong Kong, astronomers lined up along the city’s bay with their telescopes to watch the moment the moon moves into the umbra.

Elsewhere the full Moon was captured rising over the mausoleum of Mustafa Kemal Ataturk in Ankara, Turkey.

See all the amazing Eclipse Blood Moon photos from around the world here.

7.24pm: Partial eclipse of the Moon has BEGUN

The umbral phase of the eclipse, also known as the partial eclipse, has finally begun once the Moon entered the Earth’s darkest shadow.

Stargazers will notice the partial eclipse looks like a dark disc passing in front of the face of the full Moon.

Once the Moon completely enters into the Earth’s umbra, the total eclipse will last for 103 minutes and the Moon will glow red.

The red glow is caused by refracted sunlight scattered around the Earth’s dusty atmosphere. 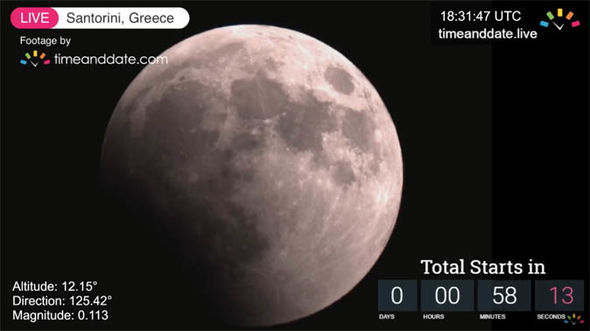 Eclipse 2018: The full Moon is slowly taking on a red colour before totality (Image: TIME AND DATE) 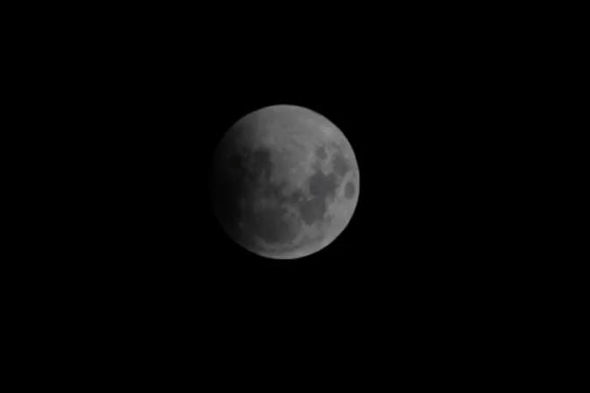 Eclipse 2018: The partial eclipse of the Blood Moon seen from Australia (Image: SLOOH)

The partial eclipse of the Blood Moon will start in less than 12 minutes, at 7.24pm UT.

The umbral stage of the eclipse will see a dark shadow creep over the face of the glowing Moon.

Once the Moon completely enters the umbra, or darkest shadow, totality will start.

The total eclipse will see the Moon change to a deep red colour for one hour and 43 minutes. 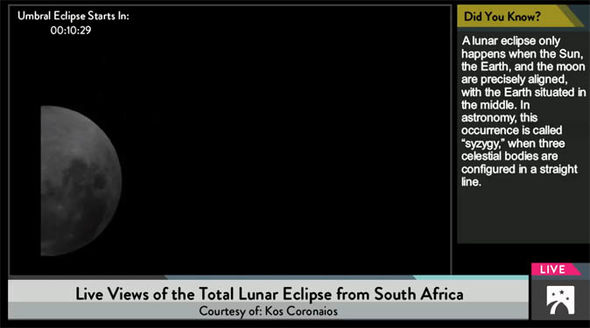 Unfortunately, stargazers in Northern and Central America will not get to see the total lunar eclipse tonight.

NASA tweeted: “At 1.14pm EDT, a Lunar Eclipse started to become visible to much of Earth’s population except North and Central America.

Bad weather or not located in the right place to see it? No worries! Watch our live stream online starting at 2:15pm.”

Astronomy enthusiasts in the British capital will gather tonight in the wide-open field of Blackheath to welcome the Blood Moon.

The Flamsteed Astronomy Society welcomes all intrigued local to pay a visit.

The official invitation reads: “We will be running an observing session at Blackheath from 9pm until around 11pm.

“In Greenwich, the Moon will rise at 8.48pm, so will already be in full eclipse at the start of the event.

“It will be relatively low in the sky but will climb to around 9 degrees altitude by the end of the full eclipse. Weather permitting, it should still be a sight worth seeing.” 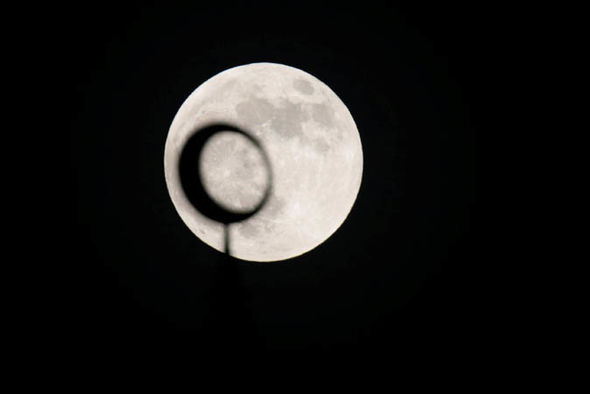 Moon experts at NASA are answering questions the public might have about today’s total lunar eclipse.

If you have any burning question concerning the Blood Moon you can tweet them under the hashtag #AskNASA.

The team behind NASA’s NASA Moon twitter feed will be at hand for the next hour or so to answer all queries.

A number of Blood Moon observers are camped outside at the Marina South Pier in Singapore to catch a glimpse of the moon.

The amateur astronomers are enjoying the penumbral eclipse with just minutes to go before partial eclipsing begins at 6.24pm UT.

The brilliant full moon was also photographed behind the spires of the Sheikh Zayed Grand Mosque in Abu Dhabi, United Arab Emirates. 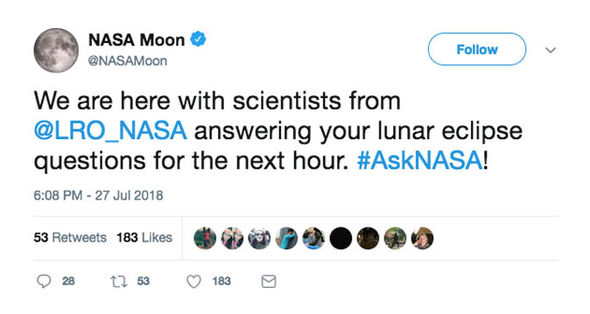 Thousands of moon-gazers around the globe are excited to witness the total lunar eclipse today.

Ian Patrick, @IPatrick_Author, tweeted: “Tonight is a Blood Moon. At 20:50hrs, stop what you’re doing, step outside and look up.

“Put down your phone and observe. Be present for this opportunity of respite from everything happening around you.”

Tolu Adele Balogun, @tolulopeab, tweeted: “My fellow Nigerians, we will experience a ‘blood moon’ or full lunar eclipse this evening.

“The world is not coming to an end, it’s not an evil event, it’s just nature.

“Should start around 6:44pm as partial eclipse and develop into a total eclipse around 7:30pm” 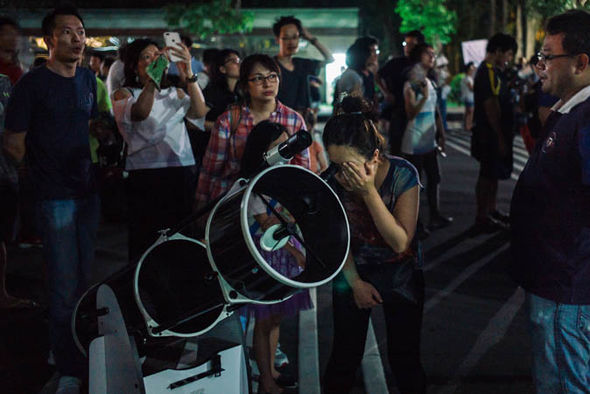 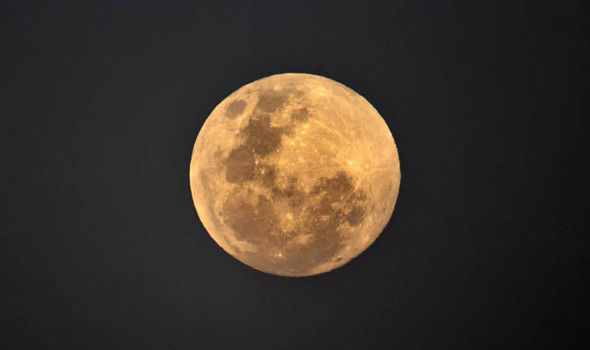 Eclipse 2018: The Blood Moon today is the longest of the 21st century (Image: GETTY)

Astronomy enthusiasts in Taiwan have gathered at the National Dr. Sun Yat-sen Memorial Hall to watch the lunar spectacle.

Armed with high-power telescopes and cameras, hundreds have gathered just as the Moon entered penumbral eclipse.

Young space enthusiasts were photographed gazing at the dark skies with binoculars.

With just a few hours before partial eclipse begins over the nightside of Earth, stargazers in Australia have already spotted the full Moon.

The full Moon in it’s whole glory was spotted over Bondi beach, one of the country’s most popular sandy attractions.

The lunar eclipse over Sydney will start with the penumbral phase at 3.14am AEST on the morning of Saturday, July 28 (6.14pm BST, Friday, July 27).

4.30pm: Longest eclipse of the century to take place tonight

According to astronomer Guy Ottewell, the Moon will pass through the centre of the Earth’s umbra tonight, or darkest shadow.

The space expert explained: “The umbra is the core shadow. No sunlight reaches it directly, but varying amounts can be refracted into it by Earth’s atmosphere.

“This is why it can appear brownish or even reddish, in patterns that vary at every eclipse.

“It is why the media have taken to calling a totally eclipsed moon a Blood Moon.”

Click here to find out if the Blood Moon eclipse will rise in your area tonight.

Experts Estimate The Scale of The Nord Stream Pipelines Methane Leak : ScienceAlert
Shimmering ‘Lakes’ Under The South Pole of Mars Might Be Something Else Entirely : ScienceAlert
Hubble And Webb Pics Reveal DART Impact Was Even Bigger Than Expected : ScienceAlert
Amazing New Fossils Provide Earliest Known Traces of The Evolution of Our Jaws And Limbs : ScienceAlert
We May Finally Know Why Oceans in The Southern Hemisphere Are Getting So Warm : ScienceAlert