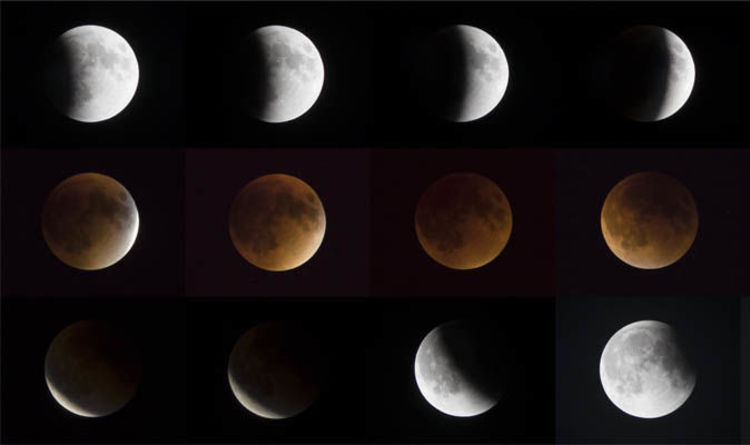 
“A solar eclipse occurs when the moon’s shadow falls on the Earth.

Compared to the Earth, the moon’s orbit is inclined by about five degrees.

Dr Kornreich said to imagine drawing a little Earth in orbit around the sun on a blank piece of paper.

If you were to draw the moon’s orbit on the same piece of paper you would fail because the planes are not aligned.

The space expert said: “Sometimes the moon will be above the paper, other times it will be below it.

“Only when the moon is crossing the plane of Earth’s orbit just as it is lining up with the Earth and sun will an eclipse occur.”

The length of a lunar eclipse will also vary depending on a number of factors.

NASA’s eclipse records show the longest eclipse currently on record occurred on July 16, 2000, and lasted one hour, 46 minutes and 24 seconds.

In the case of the July eclipse, the moon will be passing through the Earth’s shadow at its farthest orbital point.

The moon will appear smaller-than usual in the sky and will appear to move a bit slower as well.

The two factors combined result in a longer lunar eclipse the month.

Astronomer Dave Rothstein said: “The moon follows an elliptical orbit around the earth, and the distance between the moon and the earth can vary by something on the order of 10 percent, depending on what part of its orbit the moon is in.

“When the moon is closer to the earth, it is moving faster; plus, its apparent size on the sky is larger.”

Read more about why the July Blood Moon is the longest lunar eclipse of the century here.

This Is How Much Fossil Fuel The World Is Sitting on, And It’s a Time Bomb : ScienceAlert
Wolves Really Can Become Attached to Humans Like Dogs Can, Adorable Study Finds : ScienceAlert
Scientists Don’t Know What to Do With This Weird ‘Blue Goo’ Ocean Organism : ScienceAlert
Does IQ Decline as We Age? One Type of Intelligence Peaks in Your Twenties : ScienceAlert
A Weird Blob of Hot Gas Is Whizzing Around Sagittarius A* With ‘Mind-Blowing Velocity’ : ScienceAlert