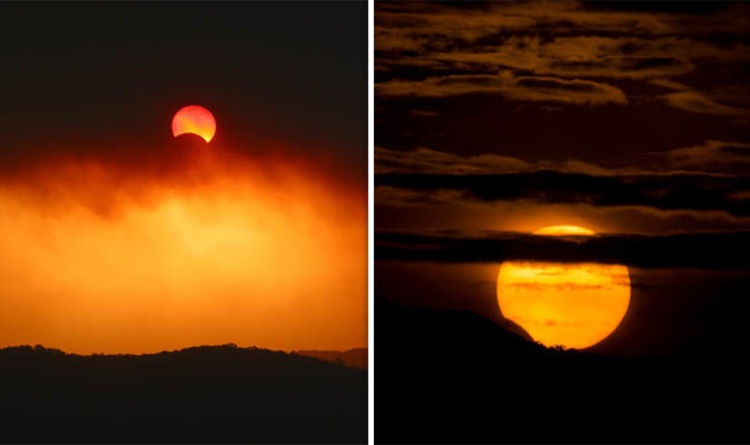 
The lunar eclipse which graced the skies as a Blood Moon two weeks ago will be paired with a partial eclipse this weekend.

Astronomy fanatics were lucky to see the rare Blood Moon in the UK twice this year and many people have been left vying for another space spectacle.

This year has been a treat for skywatchers around the world thanks to the Super Blue Blood Moon, which took place in the USA in January.

But space fans need fear not as there are a few more astronomical events set to take place and a solar eclipse is now on the horizon.

When will the next solar eclipse be in the UK?

The skies will be graced by yet another unique astronomical event this weekend on August 11 as a partial solar eclipse sets in.

However, the eclipse will not be what many people are expecting this year.

A partial rather than total eclipse, this weekend will see a tiny portion of the Moon encroach over the Sun’s surface.

The eclipse will be taking place in the outer reaches of the world, far north in the UK.

The August solar eclipse will be primarily viewable throughout Europe, to the north of North America and also North Korea.

Pyongyang will get a good view of the partial eclipse, seeing the entirety of the event, but the UK won’t be so lucky.

UK residents hoping to see the minor eclipse will have to journey far north, to the northern coast of Scotland, Orkney and Shetland.

There, people will be able to see an eclipse of two percent, as the Moon barely makes a dent in the Sun.

Those stationed in the far north of the country will be able to witness the eclipse from 8.30am to 9.20am.

During this time, the maximum eclipse will occur at roughly 8.45am.

As it progresses on its path across the planet, the first glimpses can be caught at 8am UTC (9am BST).

When is the next total solar eclipse?

The more rare and spectacular event of a total eclipse will not come around for quite some time, as America will only catch their next glimpse in 2019.

On July 2, a total eclipse will make its way across South America, straight across Argentina.

April 8, 2024, will be the next time people will be able to see a total eclipse in the USA, progressing from Mexico to the east coast.

The UK will be unlucky however, as the next total eclipse won’t be until 2090, on September 23.

A Stunning New 3D Model of The Cat’s Eye Nebula May Help Us Solve Its Mysteries : ScienceAlert
The Remains of This Recently Found Ancient Structure Are Even Older Than The Pyramids : ScienceAlert
Why House Fly Barf Is an Overlooked Potential Vector of Disease : ScienceAlert
A Robot on Mars Detected The Tremors of Meteorites Hitting The Red Planet : ScienceAlert
Does IQ Decline as We Age? One Type of Intelligence Peaks in Your Twenties : ScienceAlert