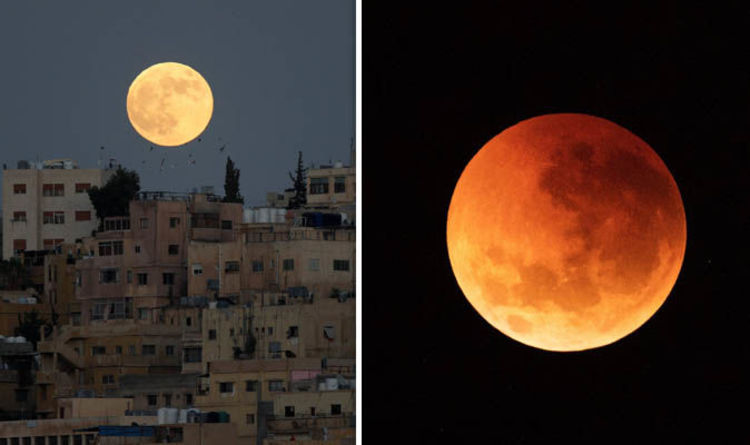 
But fear not, for the next lunar eclipse will be seen by the US as soon as January 2019.

The agency added the January eclipse will also be seen by Britons, who after tonight will enjoy a double-whammy of space action come winter.

The eclipse tonight lasted nearly three hours and was the longest of its kind to grace our skies during the 21st century.

Stargazers looked up in awe as the total eclipse lasted one hour, 42 minutes and 57 seconds, with the moon remaining red from 8.49pm to 10.13pm.

Though sadly, thunderstorms across the UK have made it nearly impossible for it to be seen by Britons, who no doubt will wait in anticipation for the next lunar event.

The cause of the Blood Moon, technically an eclipse in itself, is when the planet passes through the shadow cast by Earth.

Noah Petro, project scientst at NASA’s Lunar Reconnaissance Orbiter, said: “During a lunar eclipse, the temperature swing is so dramatic that it’s as if the surface of the moon goes from being in an oven to being in a freezer in just a few hours.”

Lunar eclipses occur on average two to four times a year when the moon passes into the Earth’s shadow.

In order for a lunar eclipse to be visible, you must be located on the night side of the Earth, facing the moon when the Earth passes in between the Moon and the Sun.

Professor Mark Birkinshaw of Bristol University commented on the lunar eclipse, stating: “Although the moon is in the shadow of the Earth, no direct sunlight is expected to hit the moon, the sun illuminates the Earth’s atmosphere and that causes some of the sunlight to be scattered in the direction of the moon.

“The moon also gets a lot redder because the light gets deviated as it goes through the atmosphere and tends to be red.

“It’s like looking at the sun at sunset – it goes red because the light goes through a dusty, murky atmosphere, and that is the light that gets through to the moon.

“That light gets reflected back and we can see the moon change colour.”

A Rare Condition Makes Hair Truly Untamable, All Thanks to These Genes : ScienceAlert
Biology Inspires a New Kind of Water-Based Circuit That Could Transform Computing : ScienceAlert
Secret Clues in Tutankhamun’s Tomb Reignite The Idea That Nefertiti Is Hidden Nearby : ScienceAlert
Superconductivity Model With 100,000 Equations Now Contains Just 4 Thanks to AI : ScienceAlert
Bitcoin’s Climate Impact Is Bigger Than Beef Farming – And It’s Only Getting Worse : ScienceAlert