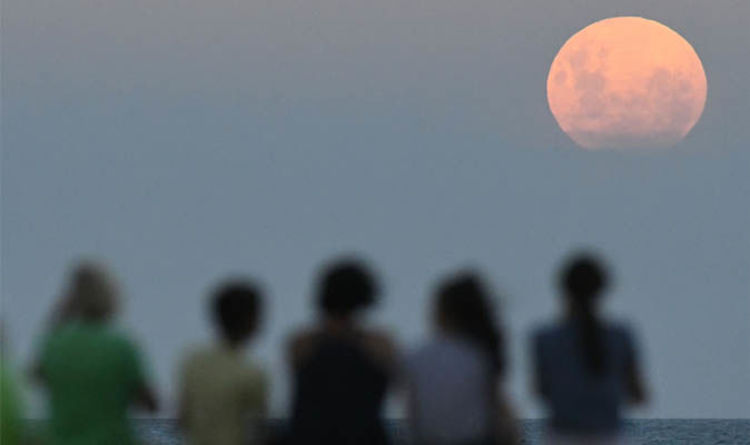 
The upcoming total lunar eclipse will see the July full moon disappear into the centre of Earths’ darkest shadow, known as the umbra.

The moon will pass through the umbra on the night of Friday, July 27, causing the moon to momentarily disappear from sight.

Soon after the moon will take on a deep red or orange hue and emerge as the ominous Blood Moon.

Astronomers are expecting the entire spectacle to last a whopping one hour and 43 minutes, making it the longest total lunar eclipse of the 21st century.

When is the Blood Moon eclipse this year?

The eclipse will begin in the afternoon hours when the moon is high in the sky but eclipse start times will vary around the globe.

The Blood Moon will begin over swathes of Central Asia and slowly creep towards Eastern Africa.

In Europe, parts of South America, Western Africa and other parts of Asia the moon will already rise over the horizon eclipsed or just passing into the Umbra.

Unfortunately astronomy enthusiasts in the US, Central America and Canada will miss out on the spectacle entirely.

Royal Observatory Greenwich astronomers told Express.co.uk the eclipse will begin in the UK at roughly 8.50pm BST for London.

The exact times of eclipse will slightly vary from city to city but the Blood Moon will be visible across the entire country.

Why will the eclipse turn the moon red?

Total lunar eclipses are often referred to as Blood Moons because of the characteristic way the shrouded moon changes colour.

It might be logical to assume the moon disappears completely in the Earth’s shadow but a spectacular trick of light makes sure the glowing moon is never gone for too long.

When the moon passes through the umbra it is pummelled with refracted sunlight bent around the Earth’s atmosphere.

The scattered sunlight filters out certain colours on the visible spectrum, leaving red and orange light to paint the moon.

The effect is known as Rayleigh Scattering and is also responsible for painting the skies red during a sunset and blue during the day.

According to the Royal Observatory, the amount of dust in the Earth’s atmosphere will affect the intensity of the Blood Moon.

The Observatory said: “The colour of the Moon during totality will depend on the global state of dust in the Earth’s atmosphere – sometimes red or possible virtually invisible.

How Many Ants Live on Earth? Scientists Came Up With an Answer : ScienceAlert
A Stunning New 3D Model of The Cat’s Eye Nebula May Help Us Solve Its Mysteries : ScienceAlert
There Are New FDA Safety Warnings About Breast Implants. Here’s What We Know : ScienceAlert
Scientists Don’t Know What to Do With This Weird ‘Blue Goo’ Ocean Organism : ScienceAlert
We Have Our First Look at Neptune’s Rings in 33 Years, And They’re Glorious : ScienceAlert