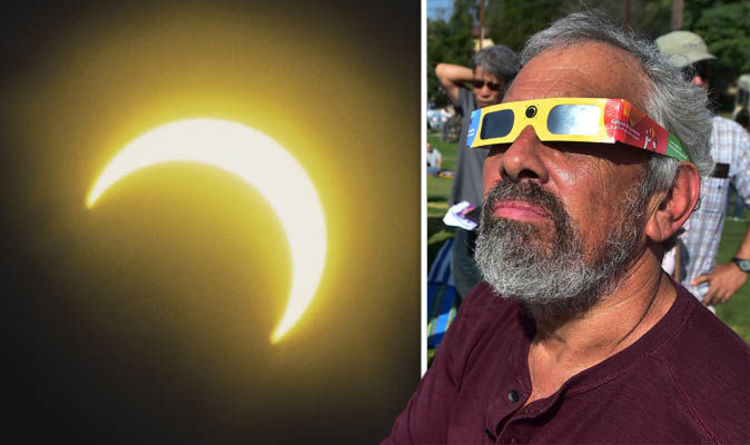 
The Sun will partially disappear behind the Moon on Saturday, August 11, when the two heavenly bodies cross paths.

The partial eclipse will be exclusively visible in the Northern Hemisphere, where the Sun could be obscured by up to 20 percent depending on where you live.

The eclipse comes just 15 days after the splendid Blood Moon total lunar eclipse peaked on the night of July 27.

The August eclipse was also preceded by another partial solar eclipse on Friday, July 13, but it was very limited in visibility.

So when exactly will the August eclipse kick off this weekend?

The eclipse will play out in the morning hours on Saturday, starting just after 8am Universal Time (UT) and wrapping up three hours later.

The Moon will start to bite into the face of the Sun at around 8.02am UT (9.02am BST) but the exact time will vary depending on your location.

The last location to wave the eclipse good-bye will see the solar spectacle end at 11.30am UT (12.30pm BST).

On a global scale, the eclipse will last just under three hours and 30 minutes.

You can find out if the eclipse will be visible over your area by clicking here: Eclipse 2018: Where will the eclipse be visible?

As with any other eclipse, the August event will start in one location and end in another – just as the Sun rises in the east and settles in the west due to the Earth’s eastward spin.

NASA’s Goddard Space Flight Center explained: “Earth rotates or spins toward the east, and that’s why the Sun, Moon, planets, and stars all rise in the east and make their way westward across the sky.

“Suppose you are facing east – the planet carries you eastward as it turns, so whatever lies beyond that eastern horizon eventually comes up over the horizon and you see it.”

The August eclipse will start out over the icy North Atlantic and Greenland before it moves in a northeast direction.

At the same time, the Moon’s shadow will appear to move over Iceland and parts of Northern Europe and the North Pole.

The eclipse will then appear over parts of Asia and Russia, with some visibility in China, North and South Korea and Mongolia.

This means stargazers in the USA and the UK will miss out on the eclipse entirely.

But the good news is less than six months from now, on the night of January 21, 2019, another total lunar eclipse of the Moon will grace the night skies.

The total eclipse Blood Moon will peak in the Western Hemisphere, covering the UK, North and South America and Northwest Africa with totality.

The Frogs Vanished, Then People Got Sick. This Was No Harmless Coincidence. : ScienceAlert
The Real Reason For Using Flight Mode Is Not What You Think : ScienceAlert
This Is How Much Fossil Fuel The World Is Sitting on, And It’s a Time Bomb : ScienceAlert
Does IQ Decline as We Age? One Type of Intelligence Peaks in Your Twenties : ScienceAlert
There’s Trouble Bubbling Up in Newly Formed Alaskan Lakes, And Scientists Are Worried : ScienceAlert