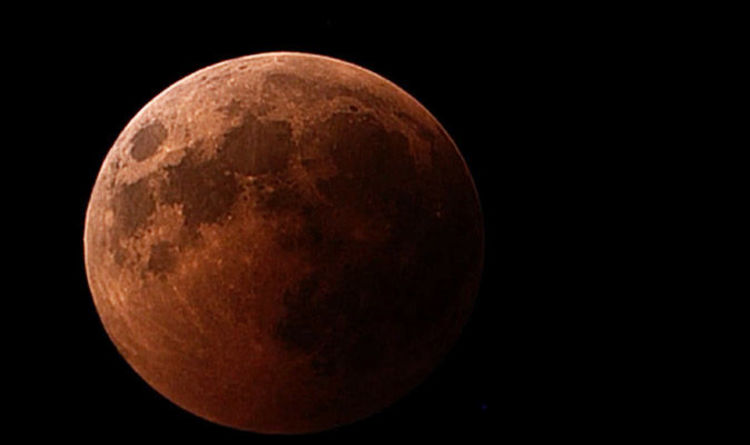 
Tonight’s lunar eclipse will be the longest of the century as the Blood Moon will show its magnificent face to the world for one hour 42 minutes and 57 seconds.

Due to the Earth currently being the furthest away it can possibly be from the Sun on its rotation, the shadow cast on the Moon will take a long time to pass through.

The light on the Moon is red due to refraction occurring in the Earth’s surface.

A total lunar eclipse occurs when the Sun, Earth and the Moon line up perfectly.

The Earth will pass between the Sun and the Moon for one hour and 43 minutes this evening.

Most of Europe will see the entire full eclipse apart from the UK, where the Moon is set to be partially visible from 8.49pm BST.

Rain clouds and thunderstorms could obstruct the Moon from the naked eye, especially the first 19 minutes.

Professor Andrew Coates from UCL claimed the Moon will not necessarily be red-coloured.

He said:“It all depends on how much dust there will be in the atmosphere.

“So there are volcanos going on in Hawaii at the moment, and all sorts of other things so we don’t know exactly how dark it will be.

“Blood red is one possibility. Another one is brook red which is a bit less.

“Possibly, also, it might just be completely dark. We don’t really know exactly until the event actually happens.

The UCL Professor added people who will miss tonight’s eclipse should not despair as another one is expected to happen in January 201.

He said: “It’s a wonderful event, it happens relatively frequently this type of eclipse, the lunar eclipse.

“In fact, there is another one visible from the UK next January, so we don’t have too long to wait.”

NASA said: “Being able to observe the Moon totally immersed in Earth’s shadow depends mostly on whether it is dark at the time the eclipse happens, so about half the Earth would be in the right place to see the eclipse, weather permitting of course.

“This time, residents of Europe, Africa, Asia, Australia, and parts of South America will be so lucky.”

Early Puberty in Girls Surged in The Pandemic, And We May Finally Know Why : ScienceAlert
A Stunning New 3D Model of The Cat’s Eye Nebula May Help Us Solve Its Mysteries : ScienceAlert
How Many Ants Live on Earth? Scientists Came Up With an Answer : ScienceAlert
The Orbit of a Sun-Like Star Reveals The Nearest Black Hole Ever Found : ScienceAlert
Scientists Are About to Fire Up The Most Powerful Laser in The US : ScienceAlert