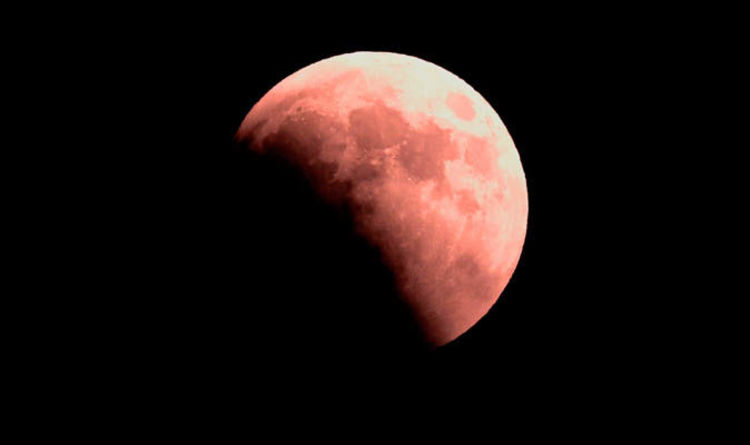 
The longest total lunar eclipse of the century reached totality outside of the UK’s line of sight but is now entering the UK’s skies.

Moon-gazers in the south of the country were anxious to see the Blood Moon make its appearance around 8.50pm BST.

In London, the Blood Moon rose over the southeastern horizon at 8.50pm BST and is now headed towards maximum eclipse at 9.21pm BST.

The Blood Moon eclipse will be visible throughout the entire country today but some locations further north and west might have to wait until 9pm or later to see the red Moon.

As the Moon rose in the nightside of the planet tonight, the glowing orb entered the Earth’s darkest shadow, known as the umbra.

That first stage of the eclipse, dubbed the partial eclipse, featured the Earth’s shadow biting out a chink of the Moon’s face.

But about halfway through the partial eclipse, refracted sunlight in the atmosphere painted the Moon with a deep red glow – the Blood Moon.

If observed from the surface of the Moon, the lunar eclipse would look like a total solar eclipse, with the Earth blocking out the sun.

Professor Mark Birkinshaw, Bristol University, told Epxress.co.uk: “Although the moon is in the shadow of the Earth, that is no direct sunlight is expected to hit the moon, the sun illuminates the Earth’s atmosphere and that causes some of the sunlight to be scattered in the direction of the moon.

“The moon also gets a lot redder because the light gets deviated as it goes through the atmosphere and tends to be red.

“It’s like looking at the sun at sunset – it goes red because the light goes through a dusty, murky atmosphere, and that is the light that gets through to the moon.

“That light gets reflected back and we can see the moon change colour.”

Weather permitting, stargazers in the UK should be able to enjoy the eclipse until about 10.15pm BST.

Unfortunately, it appears as though cloudy conditions across the country have somewhat hindered people’s moon-going ventures tonight.

Roses Del Rey, @StilinskiRosie, tweeted: “Why does the UK have to be cloudy on the day of the lunar eclipse. Ugh.”

Gemma, @gemmasarney, posted: “Longest lunar eclipse and Blood Moon of the century, trust the UK to be cloudy.”

At the same time of the eclipse, the Red Planet Mars is making an appearance low on the horizon next to the Moon.

Planet Mars is currently at conjunction with the Earth and the Sun and is closer and brighter to Earth than it has own 15 years.

The planetary position offers the best view of the Red Planet, which is currently brighter than Jupiter, well beyond July 30.

Superconductivity Model With 100,000 Equations Now Contains Just 4 Thanks to AI : ScienceAlert
Bitcoin’s Climate Impact Is Bigger Than Beef Farming – And It’s Only Getting Worse : ScienceAlert
These Are The Most Distant Star Clusters Ever Seen, And We Nearly Missed Them : ScienceAlert
Deep Brain Simulation Could Alleviate OCD When Other Treatments Have Failed : ScienceAlert
Shimmering ‘Lakes’ Under The South Pole of Mars Might Be Something Else Entirely : ScienceAlert