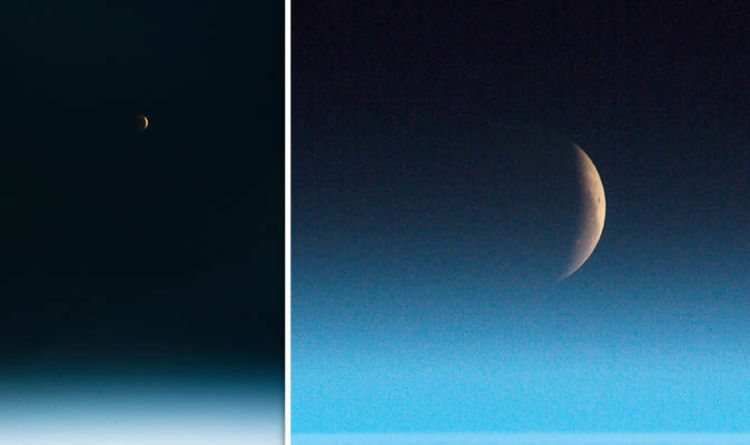 Astronauts onboard the International Space Station (ISS) were perhaps in the best location to watch the July 27 Blood Moon lunar eclipse.

Down on Earth, the Moon appeared to darken when it passed through the Earth’s shadow and took on a deep red hue.

But witnessed from the cold, dark of space the Blood Moon eclipse was something else entirely.

German astronaut Alexander Gerst has his trustworthy camera at hand to document the Blood Moon as it changed colour during the one hour and 43 minutes eclipse.

The veteran astronaut and geophysicist snapped these incredible photos from the best vantage point possible – 250 miles above Earth on the ISS.

As the orbital laboratory barrels through space, the ISS completes between 15 and 16 complete trips around the Earth.

Each trip lasts about 90 minutes, giving Mr Gerst 45 minute windows in the nightside of Earth to catch a glimpse of the Blood Moon.

And the effort clearly paid off for the astronaut because his photos of the eclipsed Moon are second to none.

On the night of Friday, July 27, Mr Gerst first snapped a stunning portrait of the glowing orb just as the moon started to turn orange.

He said: “Just took a photo of the lunar eclipse from the International Space Station.

“Tricky to capture. The slight hue of blue is actually the Earth’s atmosphere, just before the Moon is ‘diving into it’.”

Mr Gerst did not catch a glimpse of the Blood Moon until the final moments of totality when the Moon was leaving the Earth’s shadow.

The second photo shows a thin, crescent stripe of the Moon illuminated by sunlight hitting the orb from behind the Earth.

“Last photo of the lunar eclipse taken from ISS.”

But the astronaut had one more photo in store, this time taken far, far away from the Moon. 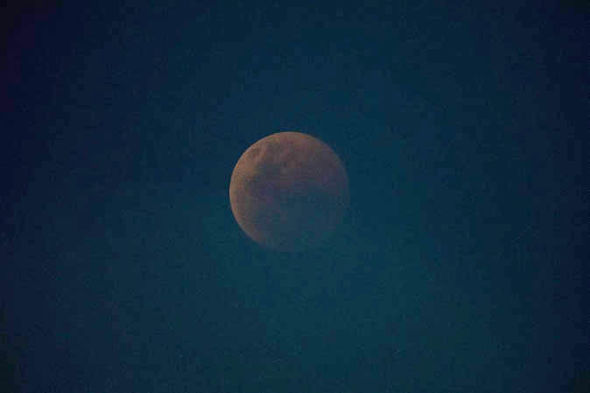 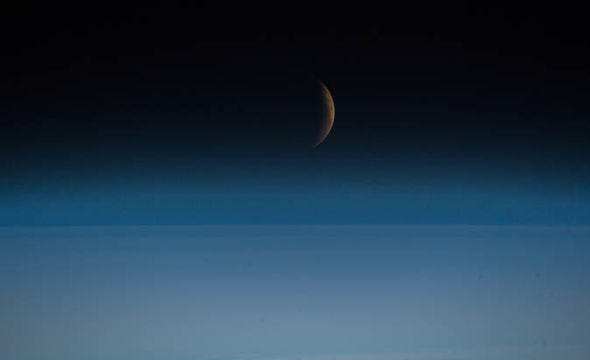 The “magical” photo of the eclipsed Moon in the distance looks like nothing more than a thin strip of curved light against the vast darkness of space.

Below the Blood Moon is a bright blue glow of the Earth’s atmosphere.

The remarkable picture truly puts into perspective the distance between the Earth and its natural satellite – 238,900 miles.

Mr Gerst said: “A partially eclipsed Moon, with our neighbouring planet in the background, just before diving into Earth’s atmosphere. Just magical.” 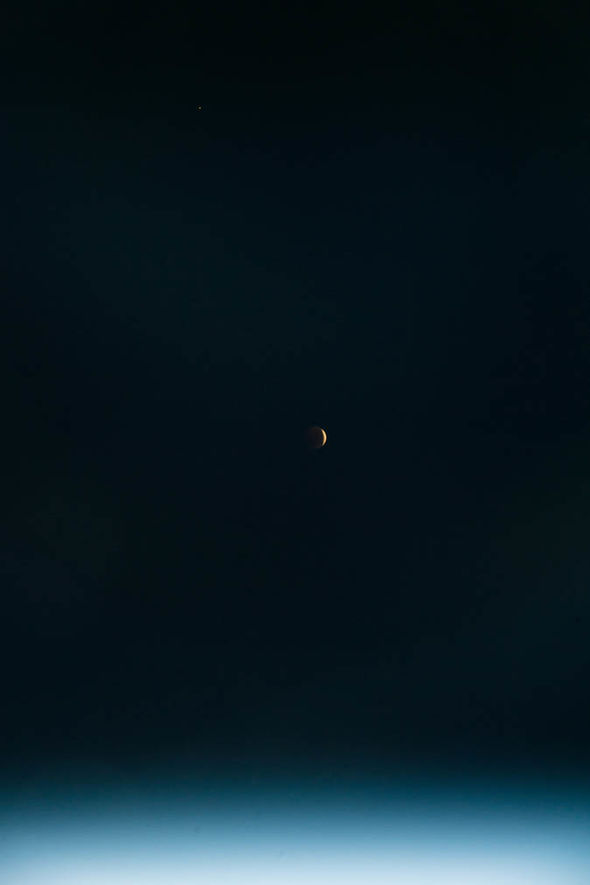 The total lunar eclipse turned the Moon a blood-red hue last month due to a trick of light known as Rayleigh Scattering.

The effect was caused by scattered sunlight refracted around the edges of the Earth’s dusty atmosphere falling onto the Moon.

The scattering of light filters out most bands of colour on the visible spectrum but least affects red and orange light, hence the unusual colour of the Moon.

The next total lunar eclipse will peak on the night of January 21, 2019, and will be visible over the Western Hemisphere.

New Discovery Means Parkinson’s Could Be Diagnosed With a Swab in Just 3 Minutes : ScienceAlert
Bitcoin’s Climate Impact Is Bigger Than Beef Farming – And It’s Only Getting Worse : ScienceAlert
Deep Brain Simulation Could Alleviate OCD When Other Treatments Have Failed : ScienceAlert
3 Major Aquatic Animal Groups Can Trace Their Lineage to This Ancient Armored ‘Worm’ : ScienceAlert
Control of a 6-Qubit Processor in Silicon : ScienceAlert