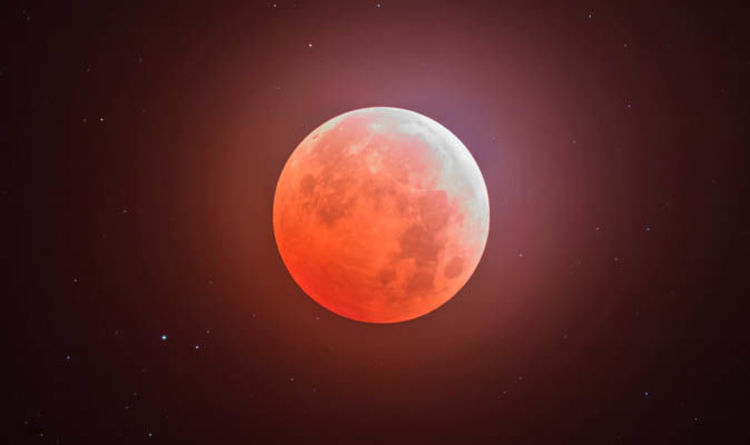 
The second total lunar eclipse of the year is just around the corner and will appear on the night of Friday, July 27.

Millions witnessed the Super Blue Blood Moon combination on January 31 this year and millions more will get to see the eclipse next week.

But do not pull out your telescopes just yet because the announcement comes with a big catch as a handful of countries in the Western Hemisphere will miss out on the spectacle entirely.

The upcoming Blood Moon eclipse will focus predominantly on the Eastern Hemisphere, covering parts of Asia, Africa and Europe.

The eclipse will begin everywhere simultaneously but the curvature of the planet will prevent some countries from seeing the moon pass through Earth’s shadow.

Will the Blood Moon eclipse be visible in your area?

The total lunar eclipse will only be visible from start to finish over a specific region of Central Asia and Eastern Africa.

This area covers nations from India, through Pakistan, Saudi Arabia, Egypt and all the way down to South Africa.

To the east and west of this optimal viewing area, the Blood Moon will still be very much visible but the eclipse will begin at moonrise and moonset.

This means observers in New Zealand, for instance, will catch a glimpse of the Blood Moon just before the sun rises on the morning of Saturday, July 28.

The opposite is true in the west where the full moon will already appear red when rising over the horizon in the afternoon.

The eclipse at moonrise will rise over most of Europe from Ukraine to the UK and even brush against Iceland.

Further down southwest in South America the viewing conditions will be less than optimal but the very last stages of the eclipse should wrap up before sunset.

Viewers in North America will miss out on the lunar eclipse for the second time this year.

The January Blood Moon was fairly visible from the US west coast and parts of Alaska and Canada, six months ago.

But this time around the whole of Central and North America will not even catch a glimpse of the red moon.

According to NASA’s Goddard Space Flight Center, the USA will have to wait until January 21, 2019, when the next total lunar eclipse passes over our heads.

The 2019 eclipse will be visible to North and South America and extend to the UK, Norway and parts of France.

The rest of Europe and Africa will see the eclipse in the morning around moonset.

A Rare Condition Makes Hair Truly Untamable, All Thanks to These Genes : ScienceAlert
A New FRB Signal Has Buzzed Nearly 2,000 Times in Just Two Months, Raising a Mystery : ScienceAlert
Engineers Gave a Car a Pair of Eyes to Make Future Roads Safer For Pedestrians : ScienceAlert
These Are The Most Distant Star Clusters Ever Seen, And We Nearly Missed Them : ScienceAlert
Hubble And Webb Pics Reveal DART Impact Was Even Bigger Than Expected : ScienceAlert