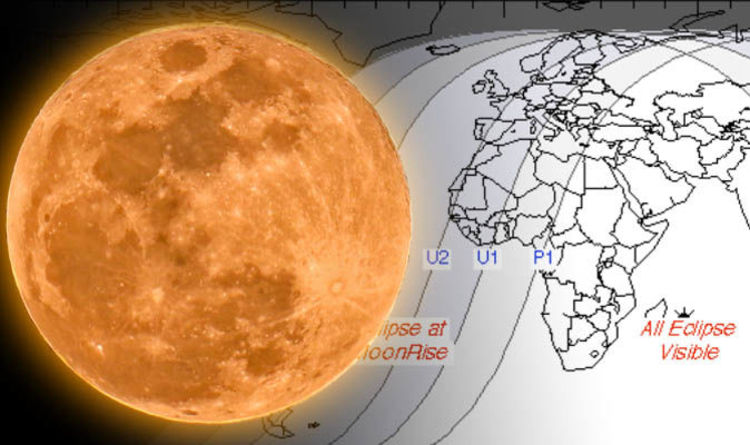 Stargazers around the globe are anxiously waiting for the Blood Moon eclipse next Friday, July 27.

The total lunar eclipse promises to be the longest of the century, lasting a whopping one hour and 43 minutes.

The eclipse will predominately feature in the Eastern Hemisphere over parts of Central Asia and Eastern Africa.

During the eclipse the moon will pass through the centre of Earth’s darkest shadow, taking on a deep red hue from refracted sunlight.

Where will the Blood Moon eclipse be visible?

The eclipse will begin far out in the east, covering an area stretching from India to Namibia.

A number of countries to the right and left of this optimal zone will only see the eclipse at moonset and at moonrise.

Astronomers at EarthSky.org said: “The total lunar eclipse will be primarily visible from the world’s Eastern Hemisphere.

The eclipse will begin everywhere about the same time but from India’s point of view, the initial penumbral stage of the eclipse will start around 10.44pm local time.

Skywatchers in India will then see the moon disappear into Earth’s shadow in the early hours of Saturday, July 28, before wrapping up at 2.43am IST.


The partial eclipse will begin at 7.24pm BST when the moon is below the horizon

Iran, Sudan, Madagascar, Iraq as well as parts of Turkey, Kazakstan and Ukraine will also get a glimpse.

To the west of this region, the moon will rise already eclipsed

For astronomy enthusiasts in the UK this means the moon will already appear red when it peaks over the horizon on Friday.

Moonrise times will vary between cities but the entire country is expected to see the eclipse.

Eclipse 2018 map: The Blood Moon will not be visible from the US, Canada and Central America 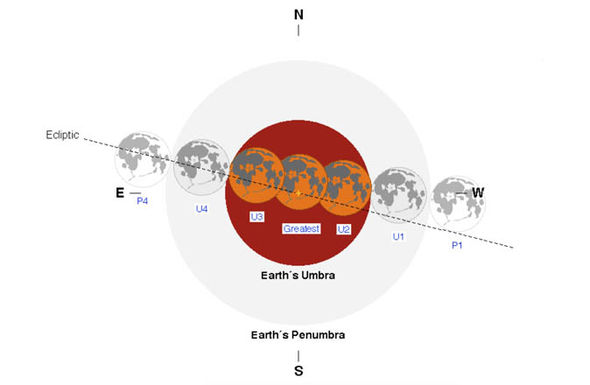 Eclipse 2018 map: The July full moon will pass through Earth’s shadow next week

For instance, the moon will rise over London at 8.50pm BST next Friday but viewers in Glasgow will have to wait until 9.26m BST.

Royal Observatory astronomer Dhara Patel told Express.co.uk: “The partial eclipse will begin at 7.24pm BST when the moon is below the horizon.

“The total eclipse will begin 8.30pm BST and possibly around that time when the lunar eclipse starts to begin we will see it after, so 8.30pm to 9pm BST.

“By about 9.20pm when the moon reaches its greatest eclipse it will be far enough above the horizon but if you don’t have a clear view you will not be able to see it as clearly.

“The total eclipse ends at about 10.13pm BST and that’s when its reddish hue will start to disappear, so if you catch it after that, it will be even higher in the horizon.

“By midnight when you try to spot the moon it will look like a normal moon – it won’t have that reddish hue anymore.”

Further out in North and Central America the eclipse will not be visible at all and the same is true for the eastern-most parts of Russia.

Moon-gazers in those parts of the world will instead have to rely on Blood Moon eclipses online live streams.

A New FRB Signal Has Buzzed Nearly 2,000 Times in Just Two Months, Raising a Mystery : ScienceAlert
How Many Ants Live on Earth? Scientists Came Up With an Answer : ScienceAlert
The Frogs Vanished, Then People Got Sick. This Was No Harmless Coincidence. : ScienceAlert
REM Sleep May Exist to Heat Your Brain Up From The Inside : ScienceAlert
There Are New FDA Safety Warnings About Breast Implants. Here’s What We Know : ScienceAlert