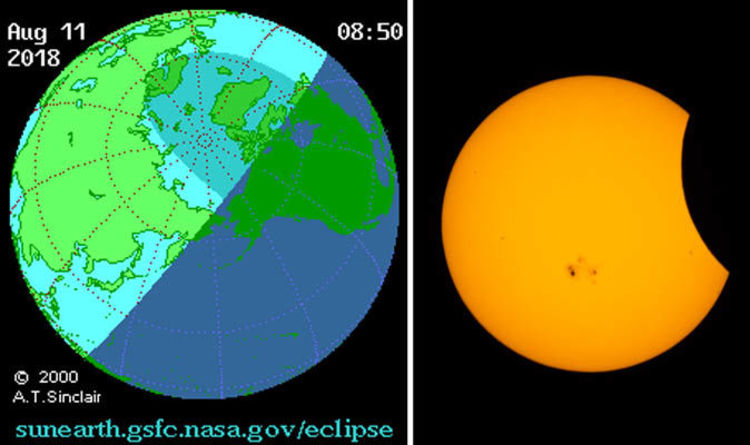 
The partial eclipse of the Sun will be primarily visible in the northernmost parts of the globe in the morning hours of Saturday, August 11.

At about 8.02am Universal Time (UT) the Moon will bite into the glowing face of the Sun, partially obscuring the star from sight.

On a global scale, the event will last about 3.5 hours as the eclipsed Sun passes over Northern Europe, Greenland, the North Pole and Asia.

The NASA map below shows the extent of the eclipse around the globe from the moment the Sun rises in the east and sets in the west.

At about 8.02am UT (9.02am BST) the eclipse will begin over the North Atlantic and Greenland.

The Sun will then sail to the northeast, over the top of the planet, on its journey towards Asia.

During this global window of opportunity, the eclipse will be seen from parts of Scandinavia, Canada, Russia, China and South and North Korea.

If you happen to find yourself on the North Pole on the morning of the eclipse, you will be best positioned to see about 65 percent of eclipse coverage.

The NASA animation embedded below demonstrates how the Moon’s shadow cast by the Sun will behave on Saturday.

The shadow will extend from the nightside of Earth over Canada and Greenland, before it brushes against the northernmost parts of Europe.

The eclipse shadow will then trail a wide path across Asia, covering countries like China, Mongolia, Russia and North and South Korea.

Why is the eclipse’s path limited to the Northern Hemisphere?

Unlike lunar eclipses where the Moon disappears in the Earth’s shadow cast by the Sun, the shadow created by the Moon during a solar eclipse is considerably smaller.

The smaller shadow only affects a select number of places around the globe, making solar eclipses a much rarer occurrence for most stargazers.

In comparison, the July 27 Blood Moon lunar eclipse was visible throughout most of the Eastern Hemisphere with partial visibility in the west as well.

Partial eclipses of the Sun are also harder to spot because there is no exact moment of totality and much of the Sun remains visible.

Because of this, partial eclipses typically peak when the Sun is closest to the horizon, meaning it is usually best seen in areas around the North and South Pole.

For example, last month’s July 13 partial solar eclipse was only seen from parts of Antarctica, Australia and New Zealand.

Even during a total solar eclipse, the path of totality is only seen across a narrow path on the surface of the Earth.

When the August 21, 2017, total lunar eclipse peaked, the Sun’s path of totality extended over a 70-mile-wide strip from the West to East coast of the US.