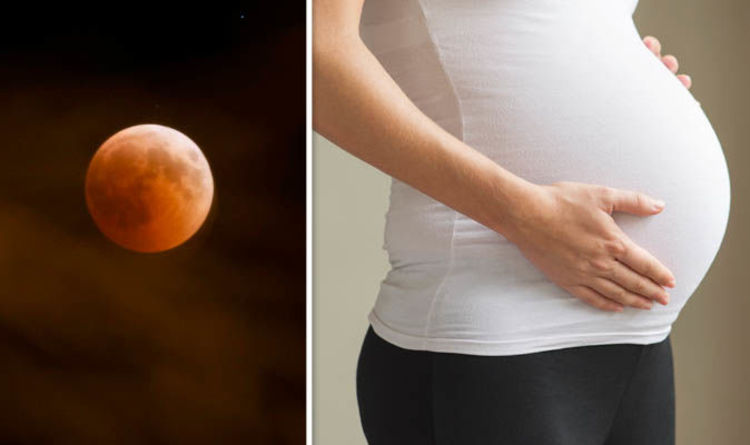 
There are superstitions which say if a pregnant women is exposed to the moon while an eclipse is underway then she is prone to harmful effects.

Superstition claims the eclipse can affect the wellbeing of the foetus, leading to physical deformity, cleft lips or birthmarks – but there is no scientific proof to validate this theory and there are no proven eclipse-related health concerns specific to pregnant women or their babies whatsoever.

Some cultures believe the harmful effects of an eclipse affect expecting women who are in the direct rays of the sun or moon while the eclipse is happening.

There are myths which say you should take extra precautions to protect your baby, these include staying indoors for the duration of the eclipse – despite there being no scientific validation.

The lunar eclipse lasts around 1 hour and 43 minutes, with the peak of the eclipse happening at 9.22pm BST in the UK.

Superstition dictates pregnant women during an eclipse should avoid knives and other sharp objects, get plenty of rest and not to cook during the eclipse and not to drink any water.

Aztecs believe a lunar eclipse was a result of a bite being taken out of the moon.

The idea translated into the Mexican superstition that if a pregnant women viewed an eclipse, a bite would be taken out of her unborn child’s face.

Hindu text credits the eclipse to the head of the demon Rahu, who ate the moon or sun.

The total eclipse will last 1 hour, 42 minutes and 57 seconds, though a partial eclipse preceded and follows, meaning the moon will spend a total of 3 hours and 54 minutes in the earth’s umbral shadow, according to NASA.

The fullest eclipse, at 2022 GMT, was visible from Europe, Russia, Africa, the Middle East, much of Asia and Australia though clouds blocked out the moon in some places.

Photographers charted the moon’s rise across the world, from the Sheikh Zayed Grand Mosque in Abu Dhabi to the Temple of Poseidon in Cape Sounion, near Athens.

In Nairobi, Kenyans watched as the moon darkened.

“This is what life is all about: Magical moments like this,” said Teddy Muthusi as he watched from Uhuru Park in Nairobi. “It’s just beautiful. It’s well worth it.”

On the banks of India’s Ganges, temples were closed ahead of eclipse. In Singapore, enthusiasts watched through telescopes at the Marina South Pier. Hundreds of people in Australia paid to watch the eclipse from the Sydney Observatory before sunrise.

When the moon moved into the conical shadow of the earth, it went from being illuminated by the sun to being dark. Some light, though, still reaches it because it is bent by the earth’s atmosphere.

We May Finally Know Why Oceans in The Southern Hemisphere Are Getting So Warm : ScienceAlert
We Just Got Our Closest View of Europa in 20 Years, And We Can’t Stop Staring : ScienceAlert
3 Major Aquatic Animal Groups Can Trace Their Lineage to This Ancient Armored ‘Worm’ : ScienceAlert
Superconductivity Model With 100,000 Equations Now Contains Just 4 Thanks to AI : ScienceAlert
Bitcoin’s Climate Impact Is Bigger Than Beef Farming – And It’s Only Getting Worse : ScienceAlert