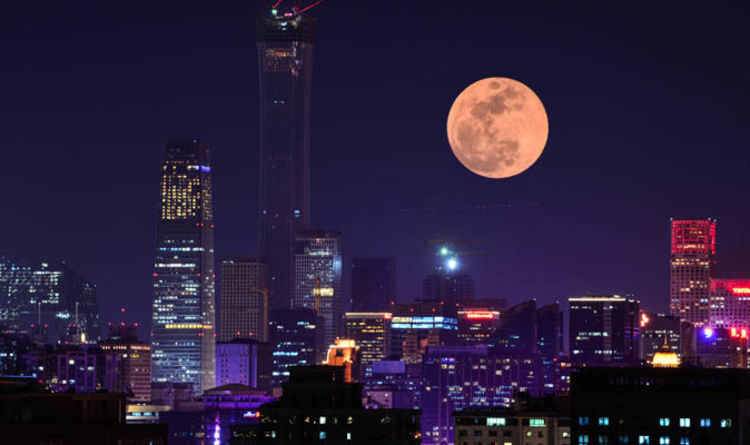 
A Blood Moon – widely used to refer to a total lunar eclipse – appears a gorgeous reddish hue due to being a fully eclipsed moon.

The Moon occurs when the moon blocks all direct sunlight from illuminating the moon’s surface – but some sunlight still reaches the lunar surface indirectly, painting the Moon in a rusty-red, yellow, or orange glow.

The total lunar eclipse took place yesterday on January 31, as sky-gazers witnessed a Blue Moon – the second full moon in a calendar month – orbiting closer to the Earth more than usual.

NASA live streamed the three lunar phenomena – a Supermoon, a Blue Moon and a Blood Moon – as they rose in conjunction to create a special celestial event not seen since 1844,

The moon appeared 30 percent brighter and 14 percent bigger on Wednesday, forming a Supermoon.

The combination of the three moons created the spectacle of an enormous, rust-red moon seen from Australia, Asia, North America, Alaska and Hawaii.

Scroll below to see how to watch the 2018 NASA total lunar eclipse live stream again.

How to re-watch the total lunar eclipse live stream

Slooh live streamed the rare Blood Moon for the total five hours and 17 minutes of the eclipse and featured webcam footage from partners in Hawaii, Australia, New Zealand and Asia.

Following the end of the total lunar eclipse yesterday, Slooh also release a video of the whole five-hour live stream – so anyone who missed the spectacular event can watch the whole eclipse again.

Viewers around the globe tuned in to the live webcast on @NASAMoon, NASA’s official lunar Twitter account.

The entire passage was expected to take more than four hours, with viewers checking in from as early as 5.30am EST (10.30am GMT) before the penumbral eclipse began and featured shots from different viewing points in western America.

Much of Europe, Asia, Australia, Africa, south in North America, South America, the Pacific Ocean, the Atlantic Ocean, the Indian Ocean and Antarctica will experience the spectacle.

Scientists Achieved Self-Sustaining Nuclear Fusion… But Now They Can’t Replicate It : ScienceAlert
This Artificial Synapse Can Run a Million Times Faster Than Ones in The Human Brain : ScienceAlert
‘Extreme Heat Belt’ to Snare 100 Million Americans in Decades, Scientists Warn : ScienceAlert
Many Cat Lovers Are Giving Their Cats Unwanted Affection, Study Suggests : ScienceAlert
Why Do Kids Get Worms, And What Can You Do to Prevent It? : ScienceAlert