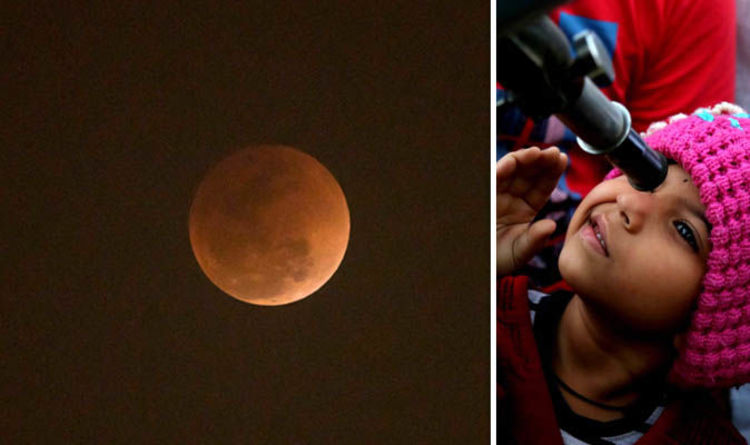 
Images from NASA’s Armstrong Flight Research Center showed a stunning crimson red moon as the lunar eclipse came into being at 12.51am.

NASA tweeted: “Notice the red tint? It’s a Blood Moon caused by Earth casting its shadow on the Moon during the lunar eclipse that’s happening now.

“For the US, this eclipse is best viewed on the West Coast.”

When does the lunar eclipse end today?

The full eclipse has now finished, ending at 4.08pm GMT time as the moon left the Earth’s penumbra, moving back to a regular bright full moon.

The total lunar eclipse, which resulted in a blood moon in a gorgeous crimson red, finished at 2.07pm.

There were 12 stages to the total lunar eclipse, which began when the moon entered the Earth’s penumbra (outer shadow) and through its umbra (inner shadow) to full totality.

Thousands of people tuned in to watch NASA’s live feed of the special lunar eclipse around the world.

Beautiful images of the full lunar eclipse has been shared on social media too.

Seattle photographer @timdurkan tweeted: “What an amazing sight of the #SuperBlueBloodMoon here in San Fransisco this morning setting right over the top of the Golden Gate Bridge.”

The super blue blood moon is the culmination of a blue moon (commonly referred to as the second full moon in a month) and a supermoon, when the Earth is at its closest orbit to our planet.

Not everyone was lucky enough to see this spectacular lunar event in its entirety.

Skywatchers in Australia, eastern Asia, parts of Canada and the west coast of the US had the best views of totality from start to finish.

The UK wasn’t able to see the spectacular event because of its occurrence in daylight hours but many people have been enjoying watching live streams.

NASA said the next appearance of a total eclipse, supermoon and blue moon will be January 31, 2037.

What an amazing sight of the #SuperBlueBloodMoon here in San Fransisco this morning setting right over the top of the Golden Gate Bridge.