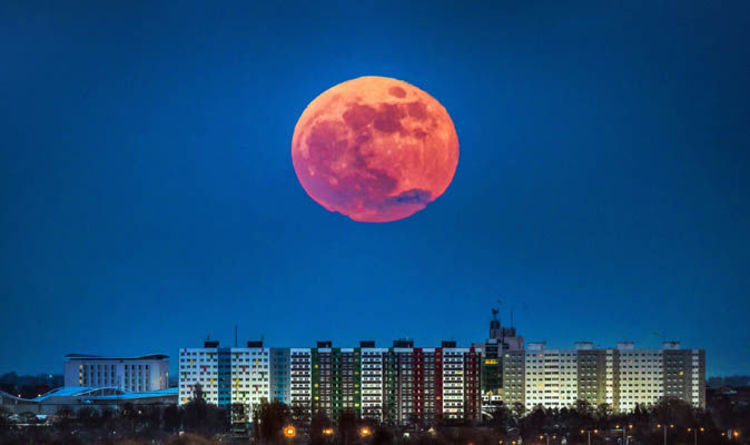 
The rare total lunar eclipse took place yesterday on January 31, which showed three lunar phenomena – a supermoon, a blue moon and a blood moon – rise in conjunction to create a special celestial event not seen for more than 100 years.

The combination of the three moons created the spectacle of an enormous, rust-red moon seen from Australia, Asia, North America, Alaska and Hawaii.

Unfortunately for moon watchers in the UK however, the reddish blood colour was not visible from the British Isles so it appeared an ordinary colour – although the large increase in size was clearly recognisable.

Scroll below to see how to watch the 2018 NASA total lunar eclipse live stream again.

How to watch the NASA total lunar eclipse live stream

Slooh, an astronomy broadcasting service, launched a live stream from 5.45am EST (10.45am GMT).

Slooh live streamed the rare Blood Moon for the total five hours and 17 minutes of the eclipse and featured webcam footage from partners in Hawaii, Australia, New Zealand and Asia.

Following the end of the total lunar eclipse yesterday, Slooh also release a video of the whole five-hour live stream – so anyone who missed the spectacular event can watch the whole eclipse again.

And moon-gazers were able to witness the Super Blue Blood Moon orbit closely to the Earth more than usual, making the moon seem up to 14 percent larger in the sky.

The entire passage was expected to take more than four hours, with viewers checking in from as early as 5.30am EST (10.30am GMT) before the penumbral eclipse began and featured shots from different viewing points in western America.

The full spectacle was a rare occurence which combined three different elements to create one incredible event.

First, it was a Blue Moon: the name given to the second full moon in a calendar month.

The Supermoon element, which means the moon appears much larger and brighter than usual, was a result of the moon moving closer to the Earth than normal.

Finally the reddish blood colour of the moon, visible in many places around the world, was caused by a total lunar eclipse as it passes through the Earth’s shadow and takes on a red glow.

Much of Europe, Asia, Australia, Africa, south in North America, South America, the Pacific Ocean, the Atlantic Ocean, the Indian Ocean and Antarctica will experience the spectacle.

This Artificial Synapse Can Run a Million Times Faster Than Ones in The Human Brain : ScienceAlert
The Moon Stole Something From Deep Inside Earth Eons Ago, and Scientists Can Prove It : ScienceAlert
Astronomers Charted The Sun’s Life, And This Is How The Story Ends : ScienceAlert
New Predictions Reveal The Fate of The World’s Biggest Ice Sheet if We Don’t Act : ScienceAlert
Scientists Gave Young Mice The Blood of Old Mice. Then Things Got Weird : ScienceAlert