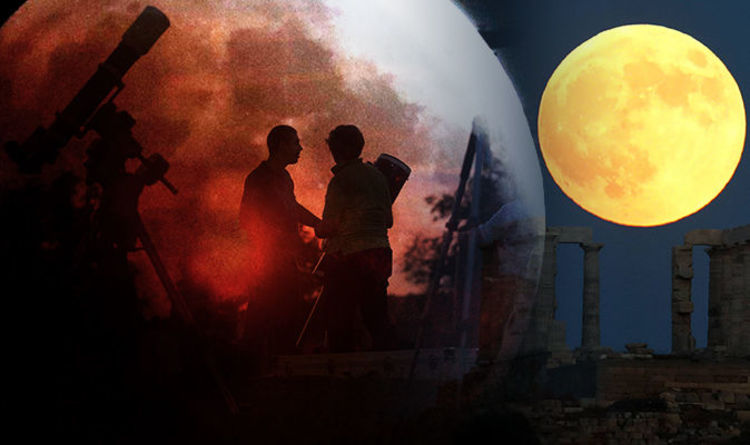 The Moon is turning red around the world, stunning millions of people stargazing tonight.

People in Athens have been gathering since the late afternoon to watch the phenomenon from the ancient Temple of Poseidon, in the oldest part of the city.

The total eclipse, the longest of the 21st century, will last one hour, 42 minutes and 57 seconds, though a partial eclipse preceded and follows, meaning the moon will spend a total of 3 hours and 54 minutes in the earth’s umbral shadow, according to NASA.

The fullest eclipse, at 8.22pm GMT, was visible from Europe, Russia, Africa, the Middle East, much of Asia and Australia though clouds blocked out the moon in some places.

Stargazers enjoyed perfect views of the lunar eclipse in many European destinations.

The Blood Moon rose above the Swiss Alps and was clearly visible in Germany.

The lunar spectacle was also visible in the Middle East, with the moon rising clearly above the city of Amman in Jordan.

Britons were disappointed after their view of the lunar spectacle was blocked by rain clouds across many parts of the British Isles.

But in some areas of the country, the show may be spoilt by light pollution, especially in big cities such as London, and clouds.

Chris Tinney, professor in the physics department at the University of New South Wales, explained there are some places where it is possible to have a clearer view of the Blood Moon.

Eclipse: The Blood Moon is taking the world by storm (Image: REUTERS)

He said: “The best place to see it is out in the country away from lights.

“If you’re living in [a city] then there’s a lot of light pollution from the night sky, so the contrast between the moon and the sky won’t be as great.”

And the bad weather had also an impact on the visibility.

In London, where the rain started pouring down at around 4pm interrupting a weeks-long heatwave, the view was obscured by clouds. 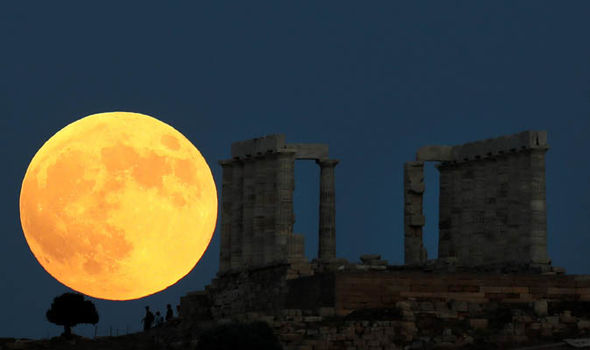 Some of the poeple who have seen their Blood Moon spectacle spoilt by the conditions of the sky took to Twitter to complain.

A Twitter user wrote: “And we are done with lunar eclipse. Clouds everywhere and light pollution had turned the sky from full moon to new moon for now.”

The first lucky people to be able to watch the spectacle were located in Australia.

There, the incredible show began just after 5.30pm GMT (2.30am on Saturday for Sydney) as the Earth’s darkest shadow started slowing eclipsing the glowing face of the moon.

Pictures have emerged of stargazers on Bondi Beach witnessing the start of the Blood Moon, which will be at maximum at around 9.30 pm BST (6am Sydney time). 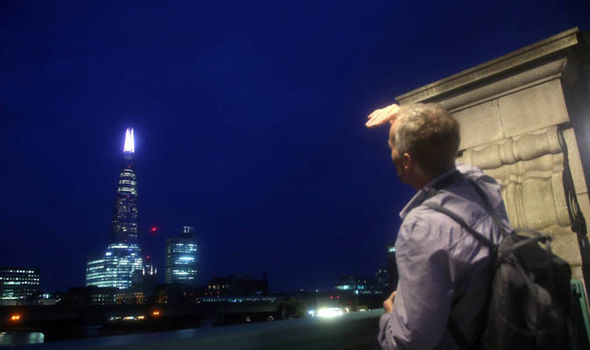 Eclipse: People in London were not able to watch the Blood Moon due to weather conditions (Image: PA) 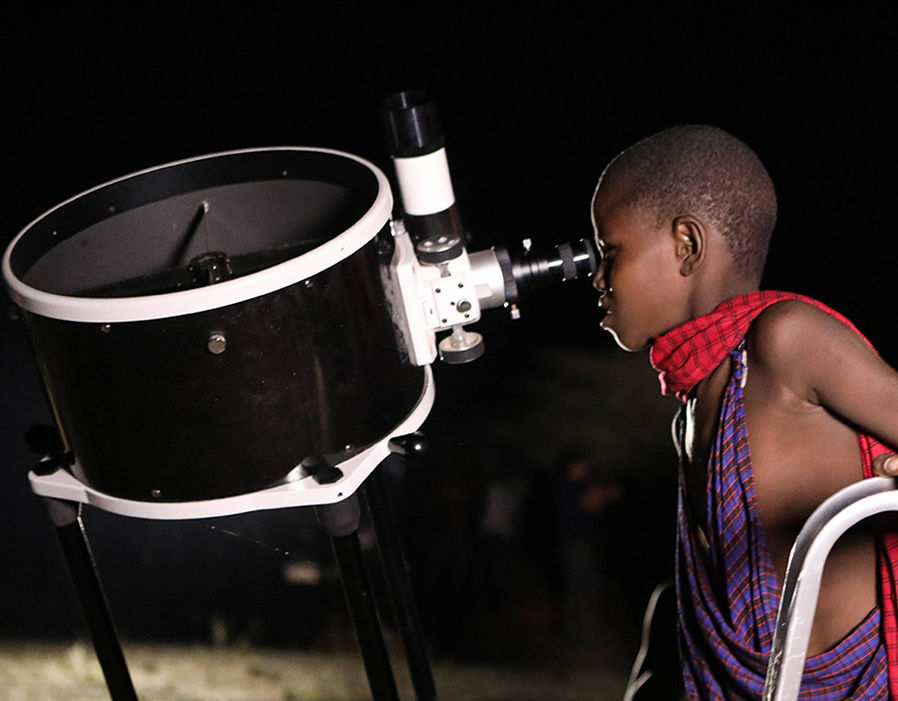 A young Kenyan views the eclipse through a telescope, in Oloika town, Magadi

In Nairobi, Kenyans watched as the moon darkened.

Teddy Muthusi, who watched from Uhuru Park in Nairobi, said: “This is what life is all about: Magical moments like this.

The Blood Moon lunar eclipse has been perceived by some as a bad omen.

The Bible contains references to the moon turning into blood and some ultra-Orthodox Jews consider lunar eclipses ominous and a cause for moral contemplation.

According to some Hindu beliefs, celestial bodies such as the Sun and Moon emit negative energy during an eclipse.

As a consequence, today some temples in India have been shut down to minimize any disturbance. 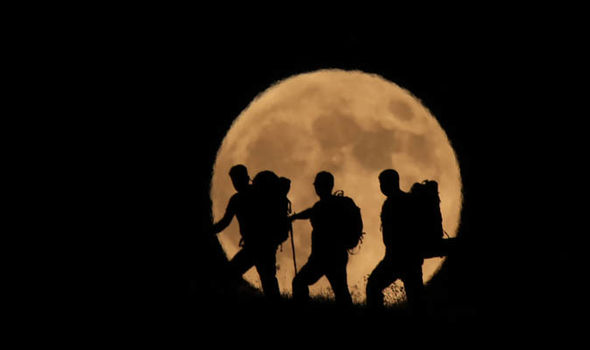 Eclipse: The Blood Moon rises behind silhouettes of climbers in Turkey (Image: GETTY) 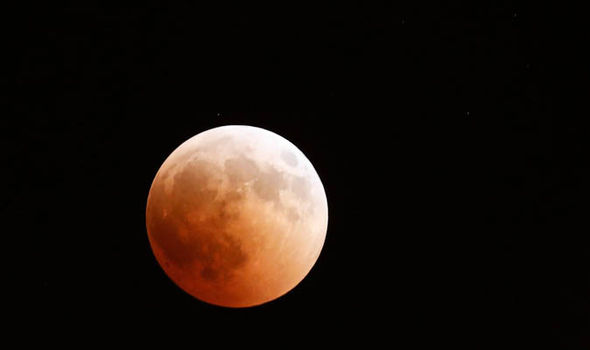 Astronomers, though, said there was no cause for worry.

Robert Massey, deputy executive director of the Royal Astronomical Society, said: “There is no reason to believe that blood moons foretell doom.

“This does not herald the apocalypse: seeing a lunar eclipse and Mars in the sky is something people should enjoy rather than worry about.” 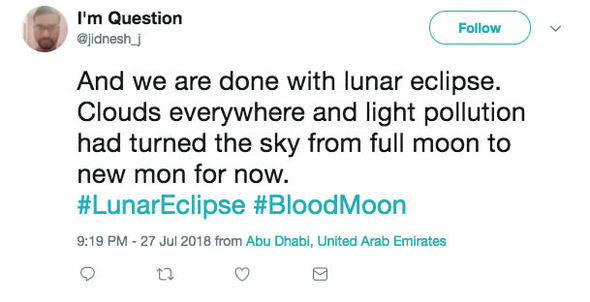 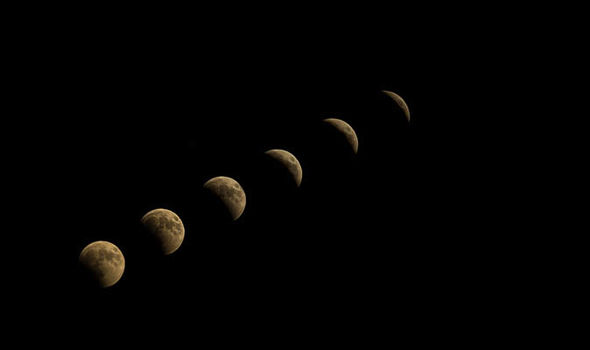 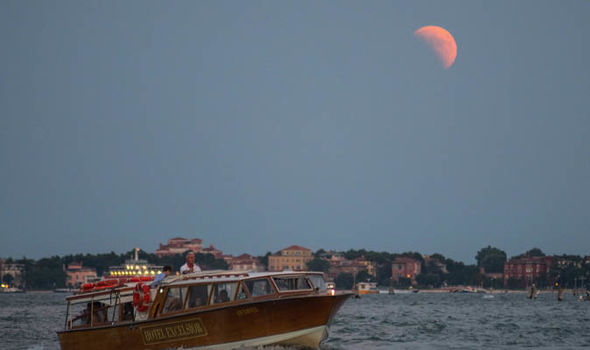 Tonight’s lunar eclipse is even rarer than the usual Blood Moon phenomena.

Lunar eclipses usually take place every six months, or a maximum of three times a year.

But this Blood Moon event is rare because of its length.

And the scientific phenomenon is also taking place while Mars is travelling closer to the Earth than it has ever done in the last 15 years. 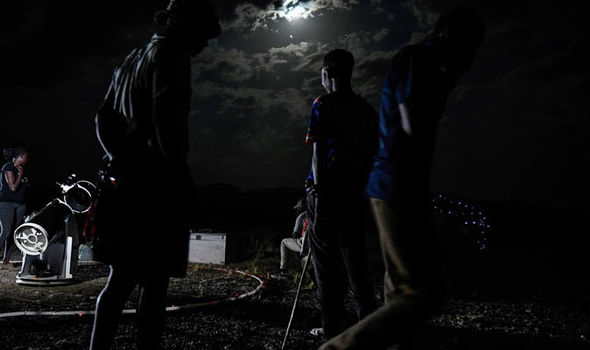 Mr Massey said: “It is a very unusual coincidence to have a total lunar eclipse and Mars at opposition on the same night.”

The phenomenon can be seen with naked eyes, and is not at all dangerous for the sight, unlike solar eclipses, as Earth will block the sunlight when interposing itself between the Moon and the Sun.

On the other hand, is very dangerous looking at a solar eclipse without the right lenses, as it could cause serious damages to the retina.

One of The World’s Largest Organisms Is Disintegrating. Here’s How We Might Save It. : ScienceAlert
Scientists Are About to Fire Up The Most Powerful Laser in The US : ScienceAlert
How Many Ants Live on Earth? Scientists Came Up With an Answer : ScienceAlert
A Robot on Mars Detected The Tremors of Meteorites Hitting The Red Planet : ScienceAlert
A Stunning New 3D Model of The Cat’s Eye Nebula May Help Us Solve Its Mysteries : ScienceAlert