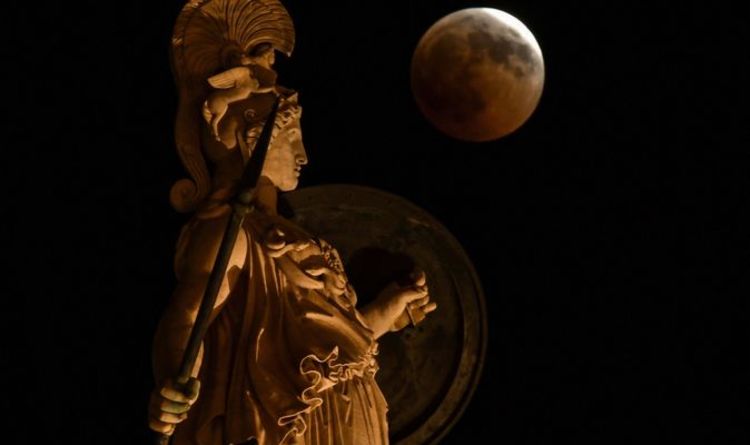 
The temperature swing is so abrupt that it’s as if the surface of the Moon goes from being in an oven to being in a “freezer in just a few hours”, according to the US space agency.

Normally, the transitions into and out of darkness and the temperature changes that accompany the shifts are spread out over the course of a lunar day, which lasts 29-and-a-half Earth days.

However, a lunar eclipse shifts these changes into high gear.

Project Scientist for NASA’s Lunar Reconnaissance Orbiter, Noah Petro, said: “During a lunar eclipse, the temperature swing is so dramatic that it’s as if the surface of the Moon goes from being in an oven to being in a freezer in just a few hours.”

Temperatures on the Moon are extremely volatile, ranging from scorching hot to freezing cold depending on where the sun is shining.

The distance from the Earth to the astronomical body is 239,000 miles, while with a radius of 1,079.6 miles the moon is less than a third of the width of the Earth.

The Moon is slowly moving away from Earth, getting about an inch further away each year.

Tonight’s lunar eclipse will be the longest this century with the Moon turning blood red, while Mars will be the closest it is set to be to the Earth for 270 years.

The lunar eclipse, known as the Blood Moon, will last between 84 to 103 minutes depending upon the location from where it is watched, with the partial eclipse being visible for almost four hours.

Mathematically, a lunar eclipse cannot last more than 1 hour and 47 minutes and tonight’s will be the longest of the 21st century.

People in the UK, Europe, Asia, Africa and parts of South America and Australia will be able to see the Blood Moon.

But stargazers in the US will not be able to watch the spectacle, as the moon will be hidden below the horizon throughout the whole event.

Those in the UK have struggled to see the spectacle so far and have been left disappointed.

We Just Got Our Closest View of Europa in 20 Years, And We Can’t Stop Staring : ScienceAlert
Narwhals Are So Weird, Scientists Used Chaos Theory to Explain Their Behavior : ScienceAlert
Secret Clues in Tutankhamun’s Tomb Reignite The Idea That Nefertiti Is Hidden Nearby : ScienceAlert
Hubble And Webb Pics Reveal DART Impact Was Even Bigger Than Expected : ScienceAlert
Bitcoin’s Climate Impact Is Bigger Than Beef Farming – And It’s Only Getting Worse : ScienceAlert