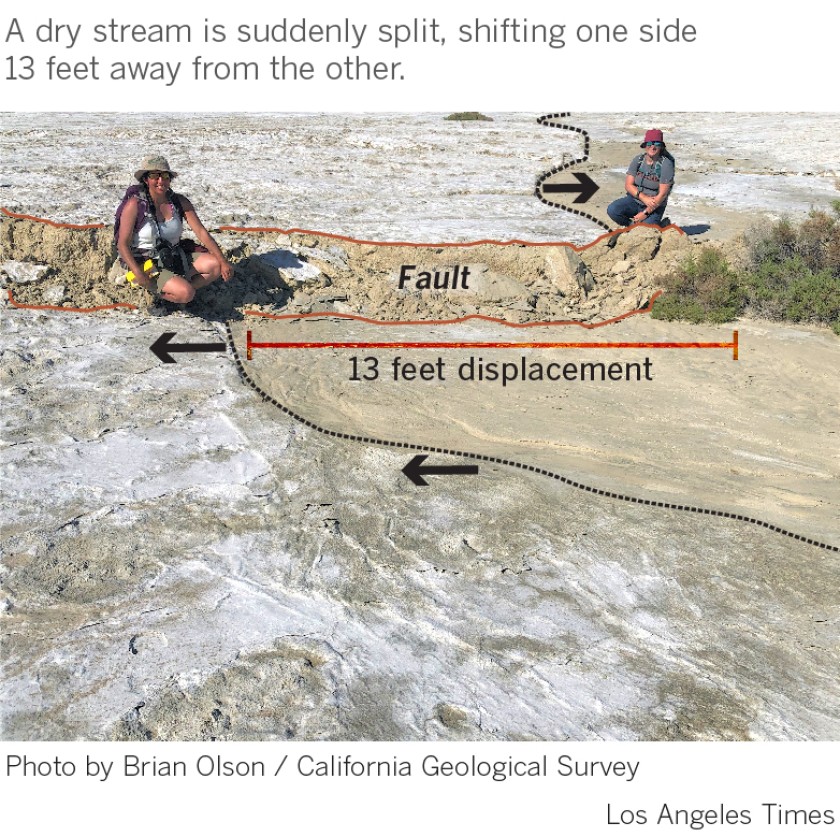 
Millions felt the shaking from the Ridgecrest earthquake.

But it’s only watching those new satellite images that you will understand how California’s biggest earthquake in nearly two decades caused the ground to break.

Some of the clearest images show long scars on the surface of the Mojave Desert, indicating precisely the 30 miles of earthquake fault — oriented in a northwest-southeast direction — that moved within moments on July 5.

“I’ve never seen this before,” said Brian Olson, engineering geologist with the California Geological Survey. “It’s really dramatic and a super-good illustrator, even for the advanced scientists, all the way down to the grade-school kids.”

The images show “the scale of movement and the permanency of movement — this ground moved in places up to 13 feet, permanently. It’s not going back,” Olson said.

Some of the most widely circulated before-and-after GIFs that have been receiving attention by California earthquake scientists were created using imagery from Google Earth and DigitalGlobe by an earthquake geologist based in Greece, Sotiris Valkaniotis, who collaborates with the National Observatory of Athens.

In a large section of the fault, images show how land on one side of the fault moved between 3 and 13 feet from the other side, Valkaniotis said.

The animations are an impressive example of what California has undergone for millennia. California sits on the edge of two gigantic tectonic plates, the Pacific and North American. A huge swath of California, from Santa Cruz to Santa Barbara, L.A. and San Diego, is moving northwest toward Alaska relative to the other plate, which is moving southeast toward Mexico.

This kind of movement has been going on for millions of years. A famous example has been how the rock formations from a single volcano right on top of the San Andreas fault have slowly moved apart for millions of years. The western side of an ancient volcano is now in Pinnacles National Park east of the Salinas Valley; its eastern half is now 195 miles to the southeast, near the western Antelope Valley in Los Angeles County.

California isn’t being just cleanly carved along the San Andreas fault. There’s a whole array of faults slicing up the state in ribbons, and the fault that ruptured in the Ridgecrest quake on July 5 was doing its job of moving the southwestern side of land from the fault toward Alaska.

The images are among the best of their kind in decades for California. For one, the earthquakes occurred in the desert — perfect to identify the trace of a moving fault without buildings or trees obscuring cracks in the earth. “It’s easier to identify,” Valkaniotis, in a telephone interview Sunday, said of seeing the fault rupture.

“There is no vegetation … aerially, there are no land-use changes,” he said. Similar efforts to do imaging by satellite for a strong earthquake months ago in Papua New Guinea were frustrated by the region being covered in tropical vegetation, obscuring the ruptured fault from view.

The last two biggest and comparable quakes to hit the Mojave Desert in Southern California were the magnitude 7.3 Landers earthquake in 1992 and the magnitude 7.1 Hector Mine quake in 1999. But it would be years after those quakes before similar before-and-after comparisons were done, Valkaniotis said. And it was only about 20 years ago that the modern age of digital photography began.

Ground rupture was observed after the magnitude 6 Napa earthquake in 2014, but the ground displacements were much smaller, topping out at a maximum of 1½ feet, owing to the far less powerful nature of that temblor. The July 5 magnitude 7.1 Ridgecrest quake was 45 times more powerful than the Napa quake.

The higher the magnitude, the greater the distance two sections of land can move away from each other in a quake. One famous example observed in the great magnitude 7.8 earthquake that leveled San Francisco in 1906 was at Point Reyes in Marin County, where a fence that intersected the fault was suddenly cut in two, separated on each side of the San Andreas by 18 feet.

A similar-sized quake along the southern San Andreas fault near Palm Springs would produce even greater fault movement. If a couple had the misfortune of holding hands across the fault in a remote part of the desert near Desert Hot Springs when a hypothetical magnitude 7.8 quake hit, they’d suddenly be separated by as much as 30 feet — almost the entire length of a city bus, U.S. Geological Survey research geophysicist Kate Scharer said in 2017.

The satellite images from the Ridgecrest quake match up with evidence of broken ground observed on foot. Olson has taken other photos on the ground that have similarly been dramatic. One is a two-lane road that crosses the fault; photos show the road has split and shifted 8 feet out of alignment.

Another is a dramatic photo of a dry streambed, in which its northern shore, at the moment when it crosses the fault, has now suddenly shifted to the north by 13 feet from its original path. “To be able to say this was flowing across this [fault] straight and, after the 7.1, it moved 13 feet north, and you’re just like, ‘Whoa.’”

The new sudden bend in the streambed is similar to earthquake-caused bends in streams in the East Bay along the Hayward fault and along the San Andreas fault at Wallace Creek in Carrizo Plain National Monument.

The action of the fault illustrates how anything on top of it can be destroyed when the fault suddenly moves in a quake. Noting the broken 10-inch plastic pipeline that was shown on satellite imagery leaking water, Olson said, “imagine if it’s a 24-inch high-pressure gas line or a petroleum pipeline, or one of the fiber-optic cable networks that supply internet to the Los Angeles Basin….

“An earthquake is not only shaking and what the shaking does to buildings,” he said. “When you get to the level of the fault breaking the surface, it’s a smaller area affected — but the things affected can be critical for the community.”

One such trouble spot for Southern California is the Cajon Pass, the gap between the San Gabriel and San Bernardino mountains through which Interstate 15, the main route to Las Vegas, is built. Not only is it home to the San Andreas fault, but running through it is also a potentially explosive mix of pipelines carrying gasoline and natural gas, and overhead electricity lines.

All it would take is for the fuel line to break and a spark to create an explosion that could result in a crater, according to a U.S. Geological Survey simulation of a magnitude 7.8 quake on the San Andreas. It is also plausible that, under certain conditions, a magnitude 7.8 earthquake could create such a sudden interruption of high-voltage interstate transmission of electricity that “potentially all of the western U.S. could lose power,” and restoring electricity in Southern California could take days.

Another concern is water. Los Angeles gets almost all its water from three major aqueducts, flowing from the Colorado River, the Owens Valley and the Sacramento-San Joaquin River Delta. But as they make their way into the region, the aqueducts cross the San Andreas fault a total of 32 times. Officials have long warned that a massive temblor on the San Andreas could destroy key sections of the aqueducts, cutting off the water supply for more than 22 million people in Southern California.

The Bay Area also has its own trouble spots, with water pipes and the BART commuter train tracks passing through the Hayward fault. Many homes in the East Bay lie directly on top of the fault. Some buildings, including old city halls in Hayward and Fremont, have already been abandoned.

At Memorial Stadium at UC Berkeley, seating was recently broken up and rebuilt in anticipation of a future earthquake on the Hayward fault that could move the facility’s western half 6 feet away from the other side.

Fault rupture has caused damage in other quakes, such as the 1971 Sylmar temblor. Lawmakers quickly passed a state law generally banning new construction directly on top of faults.

The threat of destruction on top of faults is such a risk that some agencies have taken steps to vacate or demolish buildings directly on top of them. San Bernardino Valley College razed seven buildings along the San Jacinto fault in the 2000s; in 1991, Los Angeles Southwest College tore down two that sat on top of the Newport-Inglewood fault.

Implementation of the law has sometimes come with controversy. There’s an effort to build a $1-billion high-rise project in Hollywood; state geologists in 2014 identified an active strand of the Hollywood fault running underneath the property; city officials, however, have agreed with the developer that there is no active fault under the site.

With the potential of huge destructive quakes in California, building a huge skyscraper just on top of one of these faults is just irresponsable. Crazy. Be ready and get prepared for the next big one!