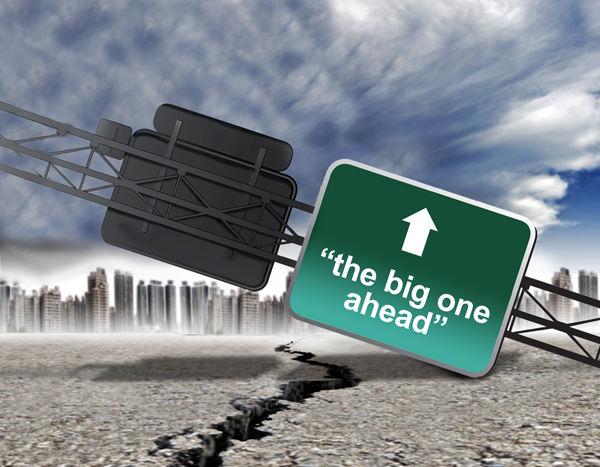 
For decades, and centuries, the San Andreas fault has rumbled and shifted and shaken the Golden State relatively often and without warning.

Two sizable quakes near Los Angeles this month has reignited some fear they may have awakened a sleepy San Andreas, which hasn’t produced a significant human-toll quake in 25 years. The danger zone runs up the entire length of California, near the coastline.

Experts almost universally agree the fault will rock Greater Los Angeles or some other populous area at some point in the foreseeable future – but when? The Uniform California Earthquake Rupture Forecast projects a major quake along the San Andreas by 2045.

“I’m certain,” said Dr Jones, a research associate at the Seismologist Laboratory at the California Institute of Technology last week, “the probability of a big San Andreas event is 100 percent if you give me enough time. In other words, plate tectonics isn’t stopping.“

Hmm. This is missing an important part of the quote. I’m certain the probability of a big San Andreas event is 100% IF YOU GIVE ME ENOUGH TIME. In other words, plate tectonics isn’t stopping. But it’s possible the big one is still 100 years away. https://t.co/771LvPL4NA

“It’s possible the big one is still 100 years away.” Or it’s a year, or a month, or a week away. That’s the thing with seismology — it’s as inexact a science as inexact gets.

It didn’t feel far away for those in the Mojave Desert this month, where a 6.4-magnitude quake struck July 4 and a major 7.1-magnitude shaker hit the very next day, shifting, cracking and fissuring the ground. They were two powerful quakes to be sure, but not close enough to populated areas to cause the kind of harm inflicted by the Northridge earthquake in 1994 – the last major temblor to cause catastrophic damage and widespread deaths in the seismically active region.

While the back-to-back quakes this month led some to sleep outside for at least a night, experts like Jason Ballman of the Southern California Earthquake Center said it was business as usual.

“The good news is nothing was unusual about this earthquake sequence,” he said. “I know after big earthquakes, people want to feel there was something special, unique about their experience because it makes them feel that what they experienced was something special.” Well for me and most people across the globe, these events and those that are happening currently there were something very special, indeed!

While the recent earthquakes happened in the southern portion of the state – the second was felt as far away as Las Vegas – geophysicist John Bellini of the United States Geological Society’s National Earthquake Center said they actually had no bearing on the San Andreas fault because it occurred along the little-known Eastern California Shear Zone, a part of a geological trough called Walker Lane.

Although the quakes didn’t directly affect the San Andreas, to say they can’t influence the susceptible region would be false – particularly because most scientists agree a major quake on the fault is about 160 years overdue. Californians, Bellini said, were fortunate this month’s epicenters were closer to the desert than a large urban center like Los Angeles or San Francisco.

“First, it happened in a smaller residential area that didn’t have a lot of buildings,” he noted. “In a larger city where you have a great range in buildings and their ages, you would have probably had a lot more damage.

What the quakes did show, Ballman said, was that keeping structures compliant with California’s strict building code makes a significant difference.

“I know it’s not sexy [to say] stronger building codes worked,” Ballmann said. “California has spent years building to stronger codes and that proved critical. We can do that elsewhere. Yes, it’s more costly upfront but even older buildings can be retrofitted.“

So, the answer to the question — did the quakes wake a sleeping giant? As best as these experts can tell, not really.

“There was nothing in the earthquakes that would predict something else is coming,” Bellini said. “You just can’t predict earthquakes like that. We didn’t know the 6.4 earthquake was a foreshock until the second earthquake happens because it’s impossible to tell until it happens.“

Ballmann said one thing of note to take from this month’s activity is Californians should always be aware of potential earthquakes, and be prepared if one occurs.

“One day the Eastern California Shear Zone will potentially overtake San Andreas,” he said. “One day could be a million years from now. We fared well this time around.“

Most seismologists have said the quakes this month elevated the likelihood of a new quake by between zero and 10 percent.

Jones said one potential pattern to watch for is continued seismic movement over several years, as large quakes are often preceded by this type of a period. And right now, the state is actually experiencing “an extremely quiet time.“

It is sure it will happen, but nobody knows when! Get ready and be prepared for the next Big One!